Palestinian dies in Israeli prison due to medical neglect 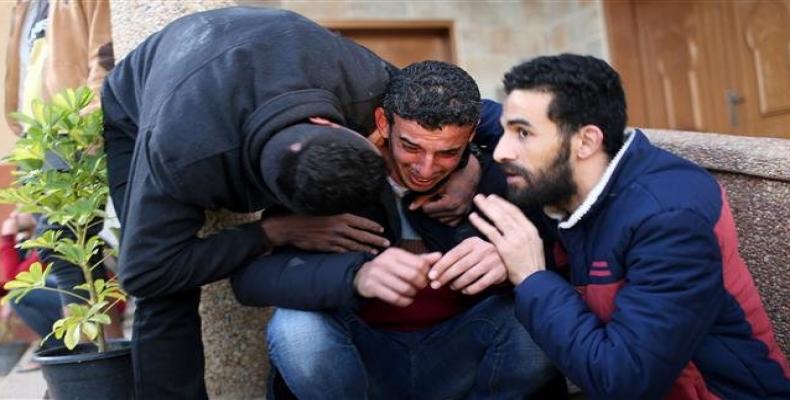 Ramallah, February 9 (RHC)-- Medical neglect killed a Palestinian prisoner who for nearly three decades had been incarcerated at the Israeli Ramon Prison in the south of the Negev desert -- a fate caused by inhumane treatment by Israel, the Palestinian Liberation Organization (PLO) said in a statement.

The 51-year-old Palestinian prisoner, Fares Baroud, from the al-Shati refugee camp in the besieged Gaza Strip, died after serving 28 years in Israeli prisons, four of which had been spent in solitary confinement.

PLO Executive Committee Member Hanan Ashrawi said the Israeli government was "fully responsible for the untimely death of Faris Baroud and the inhumane treatment he was subjected to for nearly three decades."  Ashrawi said: "It is high time for Israel’s brutality against Palestinian prisoners, illegally imprisoned inside Israeli territory, to be thoroughly and independently investigated."

According to the Palestinian Prisoners and Former Prisoners’ Affairs Committee Baroud died shortly after being transferred from the Israeli Rimon prison, in southern Israel, to an Israeli hospital for intensive care for his deteriorating health.

He had suffered from severe pains in his liver due to disease, asthma, and hernia, although was denied medical treatment in Ramon prison, according to Palestinian Prisoner's Society.  Last year his liver, or kidney -- reports are mixed -- was partly removed.  In the last four months of his life, he had lost 80 percent of his eyesight and developed glaucoma.

Baroud had been detained in 1991 and sentenced to life in prison plus an additional 35 years for killing an Israeli settler, Ma’an News Agency reported.  Israeli authorities denied Baroud family visits for 18 years.  The 51-year-old man was supposed to have been released in the prisoners' exchange with Israel in 2013, but Israel refused to release 30 prisoners who had been on the list for release.

The PLO Committee held the Israel Prison Services fully responsible for Baroud’s death due to medical negligence and warned that more Palestinians with chronic illnesses could die in the Israeli prison system.

The organization confirmed that since the beginning of the occupation of the West Bank, including East Jerusalem, in 1967, 60 Palestinian prisoners have died while in Israeli detention due to medical negligence.