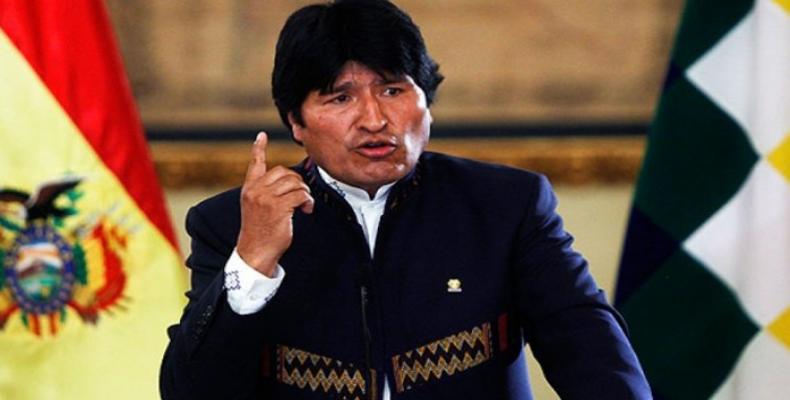 "I understand it is a rebellion of the Argentinean people against the IMF economic model and it should lead us to a deep reflection," Morales said and added that "you know how Argentina is performing in economic matters."

These statements happened on a day in which the Argentinean peso suffered a strong devaluation against the U.S. dollar, a consequence of the actions prompted by the very Macri administration, according to opposition candidate Alberto Fernandez.

Evo Morales recalled that his country managed to get rid of the influence of the IMF, an institution which used to "blackmail" Bolivian governments to implement its policy recipes.  The Bolivian leader also said the electoral result in the neighboring country should be interpreted as a rejection by Argentineans of measures imposed by the IMF after the agreement signed by Macri in 2018.

The Andean president expressed concern about the impacts Argentina's crisis could have on Bolivia. In this regard, he said that he had already spoken with business people and union leaders to visualize "how it can affect us and how we can shield ourselves."

Over the last few months, Evo Morales, who maintained good relations with the Cristina Fernandez administration, has repeatedly referred to Macri's Argentina as a case showing that where neo-liberalism governs, serious economic problems always arise.

Uruguay's Economy and Finance Minister Danilo Astori also stated that he is "worried" about increases in both inflation and fiscal deficit in Argentina.  "I am worried because the economy shows very significant imbalances," Astori said and explained that his concern is mainly based on the evolution of Argentinean economic activity, which has had "a very negative trajectory in recent years."

Since Macri assumed the presidency in 2015, however, Uruguay has been preparing to shield itself against the effects of the Argentinian crisis. "We have been reducing the 'Argentina risk' for our country, especially in the banking and financial fields," Astori added.

"Now Uruguay does not have the degree of exposure it had at the beginning of the century... we have also managed to diversify our markets to reduce the Argentinean-related trade risk."