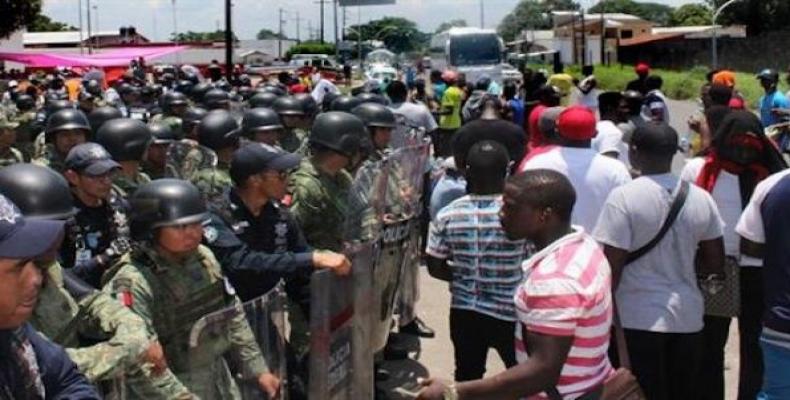 Mexico City, August 28 (RHC)-- African and Haitian migrants repeated Tuesday the peaceful demonstrations they have been holding for a week outside the Siglo XXI migration post in Tapachula in the southern Mexican state of Chiapas.

They allege corruption between Mexican authorities and agents and officers of the National Migration Institute (INM), whom they accuse of delaying official authorization that would allow them to travel across the country.

“The African migrants have other systems of organization to protest and the way in which they do so, with music and dances, is upsetting the authorities," Irineo Mujica, a human rights defender for migrants and a member of the Pueblo Sin Fronteras (People Without Borders) organization.

The activist also believes that the authorities “do not understand” the migrants and that Mexican officials are racist against Black people.  “One problem is that of language – some speak English or French and others their own languages, there are seven or eight languages.  It’s a community that’s very difficult to understand,” he said, adding that "the main problem is that African migrants don’t have a way out, a solution, and besides (the authorities) don’t want them to go to the northern border.”

Rights activists said that pressure from Washington not to allow the migrants to get to the U.S. border is the main obstacle facing the Africans with Mexican authorities.

On Monday, Mexican President Andres Manuel Lopez Obrador said that his government is “complying with its promise to make migration orderly” in his country after signing an agreement with the United States on June 7 to avoid the imposition of sanctions by Donald Trump's administration.

He recalled that in early September there will be a meeting between the Mexican and U.S. governments, given that the evaluation “period” for whether Mexico is doing enough to control U.S.-bound migration ends on September 10.

As part of the June agreement with the U.S., Mexico sent the National Guard -- a newly created security force -- to its northern and southern borders and hired more migration personnel.