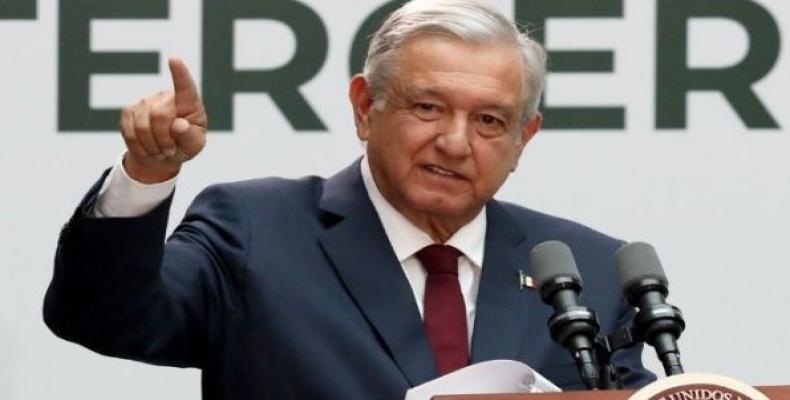 Mexico City, September 1 (RHC)-- Mexican President Andres Manuel Lopez Obrador reiterated Sunday during the first official state of the union that the main plan for his government is to end corruption and impunity, two of the main wrongs that have affected the country in recent decades and undermined its economic development.

"If you ask me to express in one sentence what the new government's plan is all about: end corruption and impunity," AMLO said.  This comes as the Mexican head of state presented his first official government report, the third in the current year, addressing a comprehensive account of his management in the first nine months leading the current administration.

In his speech, he emphasized that the real separation between economic and political power is a clear example of the new route that his administration has taken to eliminate the old practices that have damaged the country.

“The current ‘moral’ crisis was caused by the failure of the neoliberal economic model predominant for the last 36 years in Mexico. Nothing has harmed the country more than the dishonesty of the rulers,” he added.

Lopez Obrador then mentioned that the obsession of measuring everything based on the economy must be undone, since "economic growth should not be understood as an objective in itself but as a means to achieve a higher objective: the general well-being of the population."

On that point, however, he affirmed that the Mexican economy is achieving positive indicators and public coffers are restoring their balance.   In the second quarter of 2019, there was a surplus of $255 million U$D, the highest since 1980.  While inflation in July stood at 3.8 percent, the lowest since December 2016, Mexico's international reserves increased by $54.2 billion dollars and approximately US$18 billion dollars from foreign investment came into the country.

The Mexican president affirmed that corrupt hiring practices, personal use of public goods such as houses and vehicles, and payment of high pensions to former presidents are all practices that are over.

On the latter, the president reiterated his plan to lead Central American regional economic development through large projects that would include Guatemala, Honduras, and El Salvador, in order to curve migration patterns from those countries, specially bound to the United States-Mexico border.

Finally, he acknowledged Sunday that the preliminary results in terms of security "are not good", but promised to pacify the country.  "Although we still have to work hard because the results are not good in terms of reducing the incidence of crime in the country, the problem is being addressed and is our main challenge."