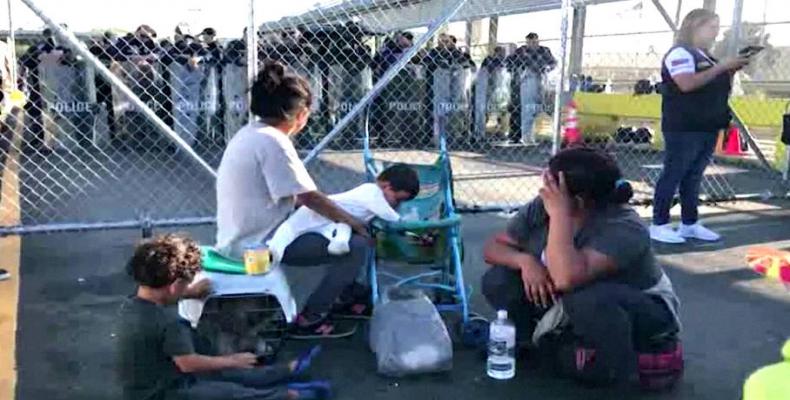 Brownsville, October 11 (RHC)-- Migrants seeking asylum in the United States have occupied a bridge linking the Mexican town of Matamoros to Brownsville, Texas.

Migrants from Mexico and Central America, including women and children, occupied the bridge to Brownsville for over 15 hours.  Asylum seekers, who had previously passed into the US were sent by American officials back to the Mexican border town of  Matamoros, a border city in crime-wracked Taumaulipas state.

Many of those in Matamoros are living in tents or on the sidewalk in a plaza abutting the bridge, awaiting court dates for hearings in the United States weeks or months later.  These immigrants were returned to Mexico under a U.S. policy called the Migrant Protection Protocols (MPP).  At least 8,000 have been sent to Matamoros under the MPP.

"We want to argue to cross over -- we didn't ask to be in Mexico, they sent us here unjustly," said a man who declined to give his name.  He said he had a court date in the United States.   in past years, Trump has ratcheted up anti-immigrant sentiments, describing the flow of immigrants from Mexico to the U.S. an "invasion."

Experts say Trump's aim is to create fear among Americans and invigorate his political base in order to win the 2020 presidential election and remain at the helm for a second term.  An anti-immigrant policy introduced by the Trump administration effectively blocked asylum seekers who have passed through a third country, such as Mexico, and not applied there for asylum firs.

“Migrants seeking asylum will have to present themselves lawfully at a port of entry,” Trump told reporters last year.  Last month, the U.S. Supreme Court issued a decision that would allow the U.S. government to deny asylum to people who have passed through a third country.