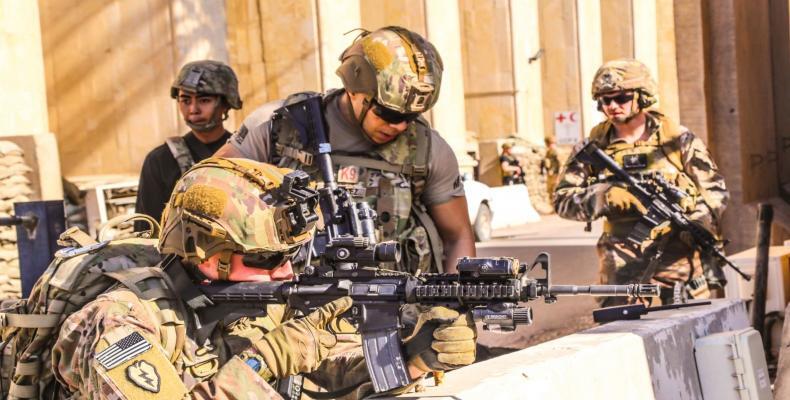 Baghdad, December 31 (RHC)-- Dozens of Iraqi protesters furious over airstrikes that targeted Hezbollah positions have forced their way into the U.S. embassy compound in Baghdad.  Tear gas and sounds of gunfire were reported at the scene.

The crowd was able to gain access to sections of the heavily-fortified Green Zone, smashing doors and security cameras on the wall surrounding the diplomatic building, according to the Associated Press.  The agency said that there was a fire in one part of the compound, and that at least three U.S. soldiers were spotted on the roof of the embassy.

Plumes of dark smoke could be seen rising from the compound, as protesters waved Hezbollah flags and chanted “Down, down USA!”, “Death to America” and “Death to Israel.”

The unrest comes after U.S. fighter jets struck three Kataib Hezbollah targets in Qaim, Iraq, and two in Syria.  The Iran-allied Shiite militia group said that at least 25 of their fighters were killed and nearly three dozen injured in the strikes.  The Pentagon accused the group of carrying out attacks on Iraqi bases that host U.S.-led coalition forces stationed in the country.