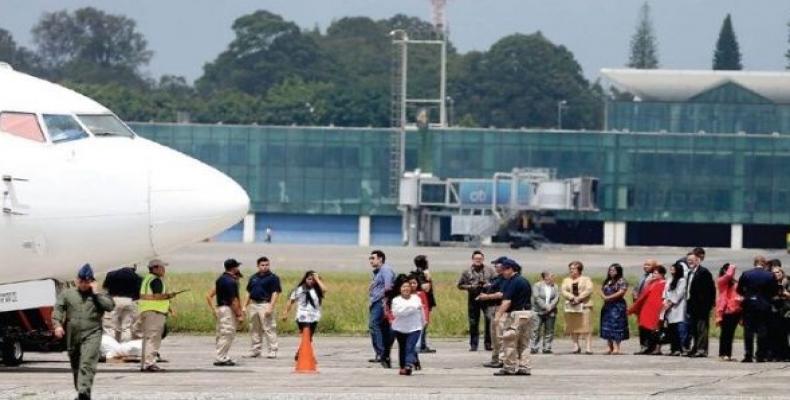 Guatemala City, March 31 (RHC)-- A Guatemalan man who was deported from the United States last week has tested positive for the novel coronavirus, the Guatemalan Health Ministry announced.

A spokeswoman for the Guatemalan Health Ministry told Al Jazeera the 29-year-old man from Momostenango, Totonicapan, was deported last Thursday on a flight chartered by the United States Immigration and Customs Enforcement (ICE) agency.  The flight, with at least 40 others on board, originated in Mesa, Arizona, according to the Guatemalan Migration Institute.

The man began showing symptoms for COVID-19 over the weekend while in quarantine in his family's home, officials said.  He was transferred to a hospital where coronavirus cases are being treated in Villa Nueva, near Guatemala City.  He is the 36th confirmed case of COVID-19 in Guatemala, according to government officials.

Ana Lucia Gudiel, the spokeswoman for the Guatemalan Health Ministry, told Al Jazeera that the other migrants who were on board the same flight are currently in quarantine in their homes across the country.  It is unclear if they will be tested for the novel coronavirus.

The Guatemalan government on March 17 temporarily suspended deportation flights from the United States of Guatemalans and Central Americans to stop the spread of the COVID-19.  Deportations of Guatemalans were resumed two days later after U.S. officials agreed to put in place measures to guarantee the health of deportees.

At least 642 Guatemalans have been deported since deportation flights were renewed on March 19, according to an Al Jazeera tally based on daily government figures.  U.S. immigration officials were not immediately available for comment.

Nearly 55,000 Guatemalans were deported from the U.S. last year, the highest number since at least 2007, according to Guatemalan government data.  Another 49,000 migrants were deported by Mexico as part of the U.S.'s regional crackdown on migration.

The increase in the number of deportations came as more Guatemalans, fleeing poverty and violence, sought to reach the United States in search of work opportunities and safety.  "More people are coming [to the U.S.], and they are being deported more quickly and with fewer options for seeking protection," Aaron Reichlin-Melnick, a lawyer and policy counsel with the American Immigration Council, told reporters.

U.S. President Donald Trump's crackdown on immigration means that migrants and asylum seekers remain in Customs and Border Protection custody longer and are deported quicker, sometimes in just over a week, according to Reichlin-Melnick.

The U.S. Department of Homeland Security announced in late March that as a result of the COVID-19 pandemic, it would begin immediately detaining and deporting migrants and asylum seekers attempting to enter the country between official ports of entry, a move that was criticised by immigrant rights groups.