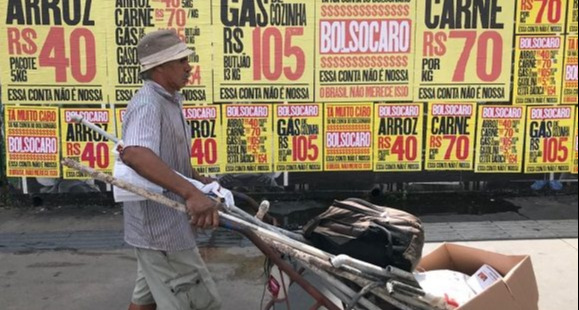 United Nations, April 18 (RHC)-- About 125 million Brazilians, out of a population of 211 million, are suffering from food insecurity.  The figure of those in extreme situations, suffering from hunger, 20 million people, takes us back to the pre-2004 stage.  It is the perfect breeding ground for Brazil to appear in the next United Nations Hunger Map report, after abandoning it in 2014.

The task of keeping the most deprived sector of the Brazilian population afloat has become more complicated by the minute in recent months.  Civil society pushed for an emergency basic income, and when the time came to implement it, the so-called emergency aid, the government found 21 million invisible Brazilians, who neither appeared in the registers nor had a bank account.  Soon after, it became clear to everyone, or almost everyone, that the effort was clearly insufficient.  Many people were still being left behind.

Further muddying the waters, the chaotic census left thousands of female heads of household without income. The emergency aid was short-lived, coming to an end in December last year, after five monthly payments of 600 reais (less than one hundred euros) each, and the effort to extend it until the end of the pandemic, and with the same initial value, has not been successful. The Bolsonaro Government has cut the number of beneficiaries, 20 million people are now left out, and also offers reduced values.  It will still not be enough.

The Getúlio Vargas Foundation (FGV) puts the level of the poor population in Brazil at 12.83% of the population (end of March of this year), tripling the level of damage contemplated at the height of this aid (six months ago).

The situation, however, has been delicate since before COVID-19.  According to the FGV, food insecurity was 17% in 2014, rising to 30% in 2019 - with an increase in extreme poverty of 68%.  These are data that oscillate constantly and depend heavily on government aid, such as the Bolsa Familia program, launched in 2003, at the beginning of President Luiz Inácio Lula da Silva's first term in office, based on other pre-existing mechanisms.

The effect of the social programs offers "immediate snapshots" -- important to work on structural measures, explains researcher Marcelo Neri from the Getúlio Vargas Foundation -- "but they do not show sustainability, people quickly return to poverty, whose data go up the same way they went down".  For Neri, the emergency aid "anesthetizes the effects of the crisis, with a temporary effect".

Marcelo Neri recognizes that "the Bolsa Familia has generated a great impact for the poorest population, as a technology that has provided a service to Brazil," but it cannot be the only development option. Moreover, "since 2014 it has suffered cuts of up to 20%, and this is a cheap program for the State: it means 0.5% of the Gross Domestic Product (GDP), when pensions mean 14%".  The values received by families, from the Spanish and European point of view, are absolutely insignificant: each family can accumulate the equivalent of 40 euros, at the most. This is the source of income they have to buy food.

The Instituto de Pesquisa Económica Aplicada (IPEA) exposed two years ago, in one of its Cuadernos de Objetivos para el Desarrollo Sostenible, the need to guarantee the Bolsa Familia a sufficient budget for the program to be as effective as possible, especially in families with children up to 14 years old.
"Given that the country is in a delicate fiscal situation and our tax burden exceeds 30% of GDP, this will probably require cuts in other areas."  Brazil has chosen another path: cutting the number of families benefiting from the program.