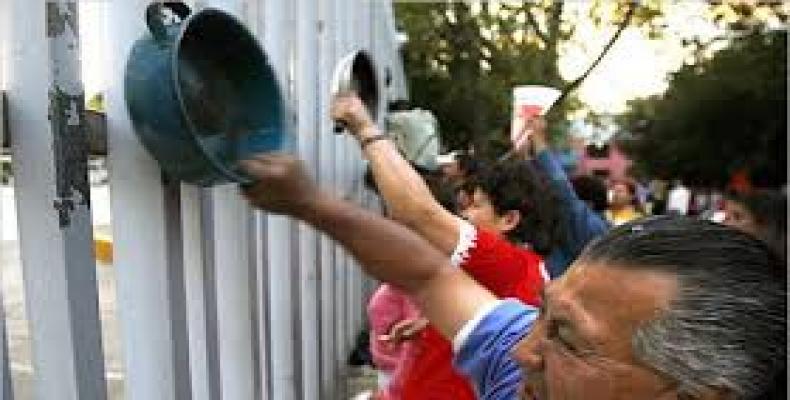 United Nations, September 25 (RHC)-- According to Hilal Elver, the UN special rapporteur on the Right to Food, the economic crisis that Argentina is facing has greatly impacted the access to food for millions of people, who are not provided adequate food security.

"We are all aware Argentina is facing a situation of economic and financial crisis," started Elver's preliminary statement after a 10-day fact-finding mission to the country which had as objective "to evaluate the realization of the right to food in the country."

Argentina "produces enough food to provide for its 42 million population," however there is no doubt that "poverty is closely linked to food insecurity," and "since the end of last year and in parallel with the economic crisis, poverty rates have begun to increase at an alarming level, in particular, affecting children," according to the Right to Food expert.

"The last official statistics available indicated a poverty rate of 25.7 percent in the second half of 2017 and extreme poverty at 4.8 percent," which represents 12.25 million people, who don't have an adequate alimentary guaranteed.

The rapporteur also highlighted "an increasing number of people going to soup kitchens or skipping meals, and children being forced to rely for their daily meals entirely on school feeding programs."

The current economic and financial crisis in Argentina is "declining purchasing power and increasing food prices," and all measures should be undertaken so the people's right to food is not in danger.  "My concerns are with not only the most vulnerable groups but also of the impacts on Argentina’s large middle class," the UN official said.

Neoliberal economic policies implemented by the Mauricio Macri government have resulted in austerity measures that are highly criticized and protested against and have become more entrenched since the South American country "reached an agreement with the International Monetary Fund (IMF) establishing a fiscal arrangement designed to address the financial crisis," the preliminary report revealed.

Hilal Elver, amid the strong economic crisis being experienced by Argentines, highlighted her desire "to recall that all human rights are interconnected and the right to food cannot be achieved without the right to adequate housing, education, health for all including migrants, indigenous peoples, peasants, children and elderly."

The UN special rapporteur also praised the work of previous governments and highlighted that  "Argentina was the top performer in the region in reducing poverty between 2004 and 2008."

Elver also expressed concern about the current crisis bearing similarities to the neo-liberal IMF-led austerity policies of the economic crisis more than a decade-and-a-half ago.  "I am aware that during the 2001 financial crisis and during its aftermath enormous numbers of Argentinians fell below the poverty line.  A repetition of this experience should be avoided at all costs."

The UN Right to Food official concluded the preliminary report by reiterating "the importance of family farming to achieve the goal of adequate and healthy food for all Argentineans.  Family farming should be promoted as a high priority in a diligent manner."