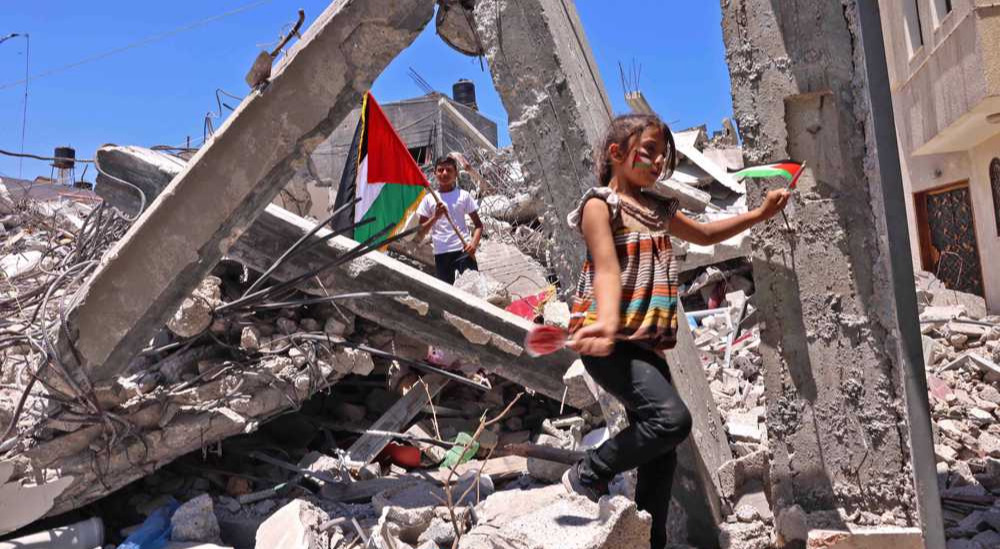 Palestinian children wave Palestinian national flags as they play among the rubble of buildings destroyed by last month's Israeli bombardment of the besieged Gaza Strip, in Khan Yunis, in the southern Gaza Strip, on June 19, 2021. (Photo by AFP)

UNICEF Palestine tweeted on Sunday: "No assistance will have dire consequences on children” in the densely-populated sliver.  The impoverished Gaza Strip, which is home to some two million people, has been under a blockade imposed by Israel since June 2007, some two years after the regime forces withdrew from the enclave.

Over the weekend, the UN Humanitarian Coordinator of the occupied Palestinian territory Lynn Hastings warned that the Israeli tight ban on bringing supplies to Gaza Strip puts vital sectors in the enclave at risk, the Palestinian Information Center reported.

She also said that in the absence of a return to regular entry of goods into the besieged enclave, the capacity of the UN and its partners to deliver critical interventions is at risk.  The UN official added that the livelihoods and basic services for the people in Gaza were also at risk.

“I urge Israel to ease the restrictions on the movement of goods and people to and from Gaza, in line with UN Security Council resolution 1860 (2009), with the goal of ultimately lifting them. Only by fully lifting the debilitating closures can we hope to sustainably resolve the humanitarian crisis and contribute to longer term stability,” Hastings said in a press release issued following her visit on Thursday to Gaza Strip.