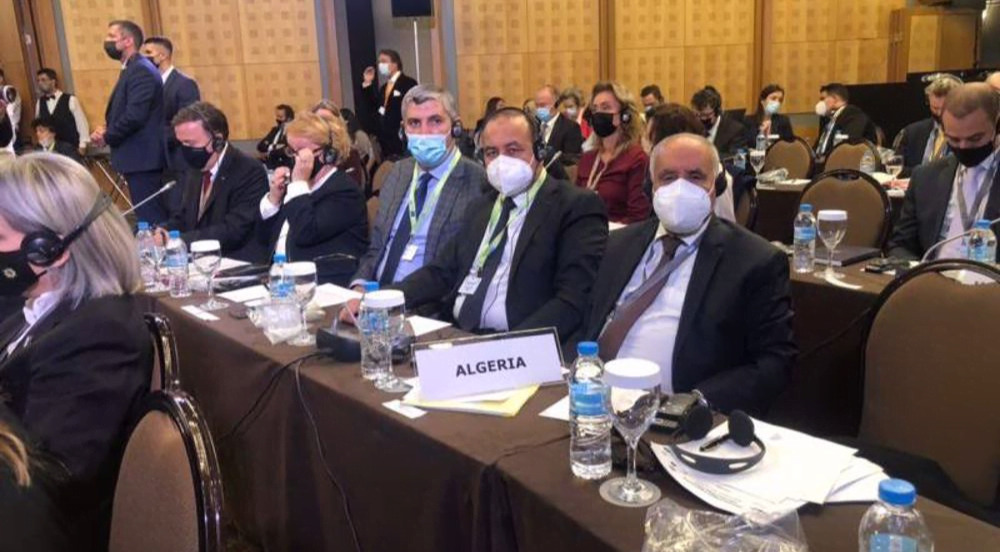 This photo provided by the independent Algerian daily newspaper Ennahar shows Algerian delegates at a recent European conference of parliament speakers, which was held on October 21 and 22 in the Athens, Greece.

Athens, October 24 (RHC)-- An Israeli diplomatic delegation participating in a recent European conference of parliament speakers in Greece was forced to change their seats at the event, after Algerian envoys strongly protested to the organizers against the order and refused to sit behind representatives of the Tel Aviv regime.

According to a report published by the independent Algerian daily newspaper Ennahar, Israeli delegates were initially supposed to sit in front of Algerians, but had no option but to change their seats in the face of the  vehement opposition and threats to withdraw from the event by Algiers.

Some 60 speakers, together with 300 other delegates, participated at the biennial summit to discuss various issues.

On October 15, Algerian Foreign Minister Ramtane Lamamra said that the African Union (AU) Executive Council had chosen to delay a final decision on granting Israel observer status in the pan-African body until the AU summit in February 2022.

The Palestinian Hamas resistance movement later praised Algeria and two non-Arab countries of the African Union (AU), Nigeria and South Africa, for appealing against a decision by the continental body to grant observer status to the “colonial” regime in Tel Aviv.

“We strongly condemn the support from any country, especially an Arab one, to grant observer status in the AU to the Israeli enemy,” said Moussa Mohammed Abu Marzook, a member of Hamas’s political bureau, in a tweet on October 17.

"We salute our Algerian brothers for their position, as well as Nigeria and South Africa,” he wrote, calling on all African countries to “oppose granting this status to a colonial substitution entity.”

Earlier this month, Algerian security forces reportedly thwarted a plot by separatists backed by Israel and a North African country to conduct armed attacks.  The Ennahar TV reported on October 13 that Algerian forces had dismantled a criminal group belonging to MAK, which is designated by the Algiers government as a “terrorist organization.”