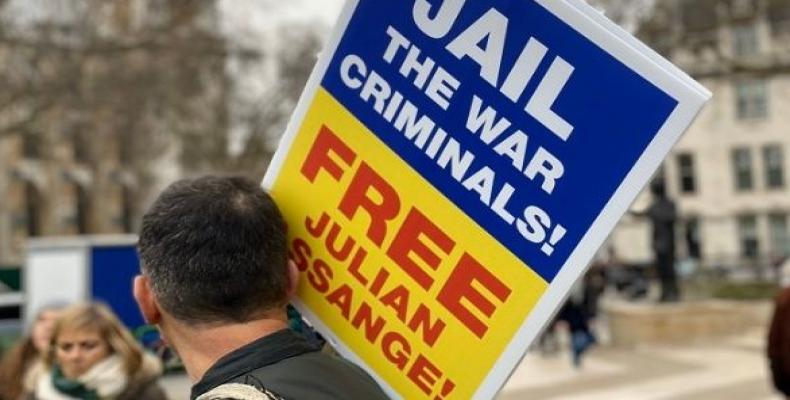 La Paz, January 5 (RHC)-- The Puebla Group expressed its support for the initiative reiterated by Mexican President Andrés Manuel López Obrador, to offer asylum to the Australian journalist and founder of Wikileaks, Julian Assange, who is a victim of political persecution by U.S. authorities.

The organization of progressive leaders of Latin America disseminated through its social networks a message in which they congratulated "the initiative of the Government of Mexico and President Andrés Manuel López Obrador to grant political asylum to the persecuted Julian Assange.  We hope (that) this will be carried out."

During a press briefing held at the National Palace earlier this week, the president again formulated the asylum proposal and valued that the U.S. administration should act with humanism with respect to the activist.

AMLO stated that "Assange is ill and it would be a sign of solidarity, of fraternity, to allow him to receive asylum in the country he decides to live in, including Mexico."

Assange is being held in London's Belmarsh Prison, in the midst of several health problems.  There he is waiting for the UK Supreme Court to decide on a defense appeal to prevent his extradition to the United States.

In the U.S., he faces 18 charges and a sentence of 175 years in prison for the revelations he made in 2010 about crimes against humanity committed by U.S. troops and allied nations during the wars in Afghanistan and Iraq.

López Obrador recalled that Mexico has a solidarity asylum policy which he described as "pride of our foreign policy."  In addition, he revealed that he sent a letter to former U.S. President Donald Trump before the end of his term, requesting that he be exonerated of charges, but the letter was not answered, he said.

According to local news media, the Mexican head of state first offered Assange asylum a year ago.

During the press conference, Mexican Foreign Minister Marcelo Ebrard informed that the government maintains communication with Assange's lawyers, who are aware of the asylum offer although at this moment they cannot take it for procedural reasons, he said.