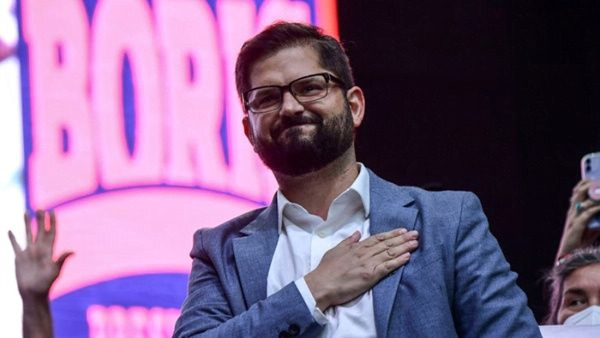 Boric said that "it feels something difficult to express and transmit (...). The fiber of the institutions goes beyond the vital experiences of each one of us". | Photo: EFE

Santiago de Chile, January 11 (RHC)-- Chile's Tribunal Calificador de Elecciones (Tricel) officially proclaimed this Monday, in a brief activity, the victory of the Frente Amplio candidate, Gabriel Boric, in the presidential elections of December 19, two months before his inauguration, scheduled for next March 11.

On December 19, it was indicated in the ceremony, "the voters voted in the second ballot to elect President of the Republic of Chile, having obtained Mr. Gabriel Boric Font the majority of the validly cast votes, a process that the Electoral Qualifying Tribunal has declared valid and in accordance with the law."

Thus, the authorities of the organism proceeded to sign the minutes, which were then received by the president-elect. Boric received the envelope with the proclamation certificate after winning with 55.8 percent of the valid votes cast, that is, more than 4.6 million.   His opponent, the far-right José Antonio Kast, obtained 44.1 percent, one million votes less than Boric.

When appearing before the press, Boric said that "it feels something difficult to express and transmit (...). The fiber of the institutions goes beyond the life experiences of each one of us".  Boric will take office at the age of 35 years and one month, just over Manuel Blanco Encalada who became president at the age of 36 years and three months.