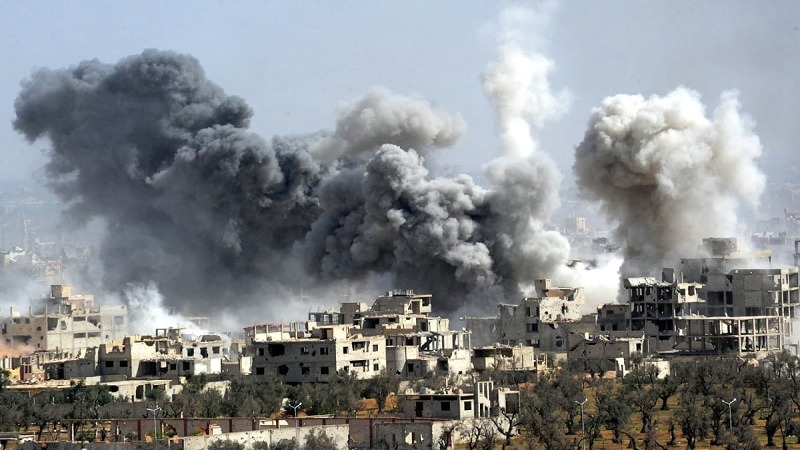 U.S. Defense Department spokesman John Kirby confirmed the illegal American airstrikes in Syria on Saturday to assist the unsuccessful attempt by the mercenary SDF militants to drive off the Daesh attack on the city’s Ghwayran prison amid reports that terrorists have taken over control of the compound.

“The clashes are still going on inside the prison, its outskirts, surroundings of the al-Basel roundabout and the highway,” Syria’s official news agency SANA reported Saturday, quoting local sources who further noted that freed terrorists have been fortifying themselves in surrounding complexes.

They also noted that SDF militants failed to protect the prison compound – the largest of several detention centers under their control in Hasakah – and surrounding facilities despite receiving aerial support from the US occupation forces.  “The battles are taking place on the edge of the prison,” SDF spokesman Siamand Ali claimed as quoted in an AP report on Saturday, adding that most of the prison is under their control apart from a small part that is held by “rioting prisoners.”  He further noted that fighting is also ongoing in the nearby Zohour neighborhood, where Daesh forces were holed up.

The report also cited Ali as saying that SDF forces and American warplanes targeted a technical academy building where dozens of "Daesh terrorists took positions,” adding that the US-backed militants are advancing slowly in order to protect the lives of civilians as Daesh gunmen are holed up in alleys and in residential homes in the area.

The clashes have also led to the fleeing of nearly 4,000 residents to areas of the city controlled by Syrian government forces, Hasakah Governor Ghassan Khalil said as cited in Syrian media outlets.

The Ghwayran prison holds about 5,000 suspected Daesh terrorists, including commanders and figures considered among the most dangerous, according to the AP report.

The development came as the Syrian Foreign Ministry slammed on Saturday the actions that led to the displacement of thousands of Syrian civilians in Hasakah province, reiterating the country’s demand for the total withdrawal of US forces from northeastern Syria and Turkish forces from northwestern Syria.

“During the past few days, Daesh and QSD (SDF) gangs committed massacres against the civilians and massive destruction in the infrastructure in Hasakah province,” the ministry said in a statement.  It further described the acts committed by American occupation forces and the SDF as “war crimes” and “crimes against humanity.”

The Syrian Foreign Ministry also called on all international humanitarian organizations to provide assistance to thousands of Syrian civilians who were displaced in such harsh weather conditions.  It came after US warplanes completely destroyed the Technical Institute building in Hasakah city under the pretext of targeting the released prisoners.   Nearly 90 people have reportedly been killed so far, as fighting raged for the third day on Saturday.

The SDF further asserted earlier in the day that “fierce clashes” broke out in the neighborhoods north of Ghwayran, where it claimed to have killed more than 20 Daesh terrorists and seized explosive belts, weapons, and artillery.

According to SANA, people have been pushed by the SDF to leave their houses immediately. The SDF imposed a curfew on Ghwayran and al-Zohour neighborhoods on Friday, the news agency added.

Syria has been gripped by a foreign-backed terror campaign since 2011, when the US and its Western and regional allies began their overt attempts to overthrow the government of Bashar al-Assad.

In recent years, the U.S. has been maintaining an illegal military presence on Syrian soil, collaborating with militants against Syria’s legitimate government, and bombing the positions of the Syrian army and anti-terror popular forces.