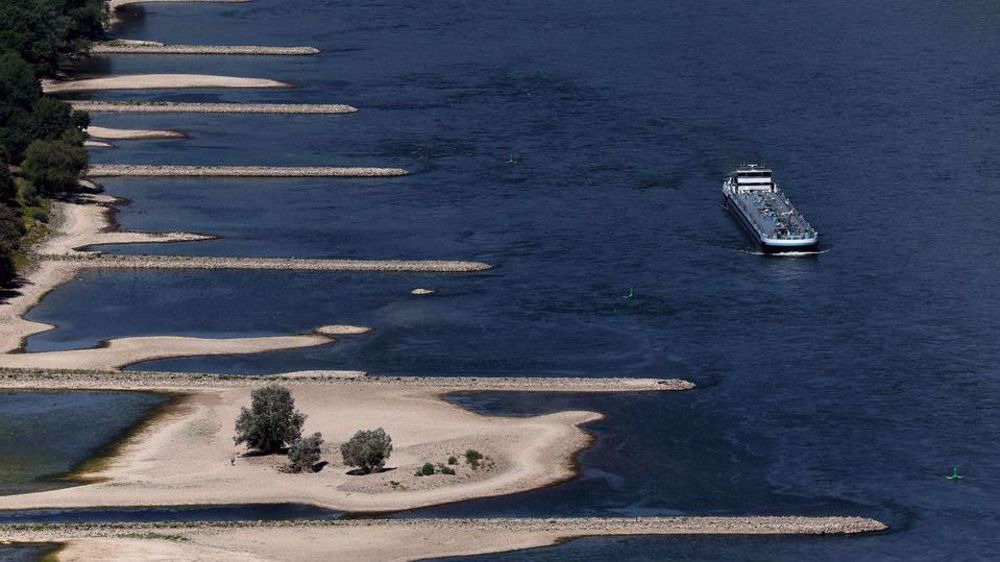 A transport vessel cruises past the partially dried riverbed of the Rhine River in Bingen, Germany, August 9, 2022.   (Reuters photo)

Berlin, August 14 (RHC)-- The water level of Germany's Rhine River has fallen to a critical 38-centimeter mark, at the checkpoint Kaub amid the continuing heatwave across Europe.

Germany’s Federal Waterways and Shipping Administration estimated that the levels would further drop by 10-15 centimeters over the coming three or four days.  The water level that was recorded at 56 centimeters last week has made it almost impossible for vessels to sail in the river.

Cargo shipping, nevertheless, continues until reaching nautical technical impossibility as shipping companies are seeing heavy losses as it is not possible to sail fully loaded into the river.  Vessels need about 1.5 meters of Kaub reference waterline to sail fully loaded.

Transport company Contargo warned its barges would "not be able to sail without danger."  They said in a statement, it would largely discontinue its barge operations on the Middle and upper Rhine River, transporting what goods it could over ground to its terminals on the Lower Rhine, warning however that its trucking capacities were limited.

"Due to the difficult situation, we regretfully have to point out that we can no longer guarantee to meet all deadlines," they added.  The river has become of great value recently as Germany is reducing its dependency on Russian gas as it eyes on being dependent on coal, whose transportation relies on river.

Meanwhile, the river's ecosystem has also been badly damaged the effects of which have been recorded with the mass fish deaths found since late July.  The environmentalists have shown concerns over the growing damage.  Climatologist Karsten Brandt said: “We are having far too high water temperatures, which is having a toxic effect on the Rhine’s inhabitants, on fishes, on the entire ecosystem.”

Experts also believe that a toxic substance is to blame for the damaged ecosystem.  An increased density of mercury in samples has also been noted in the river by the scientists in Germany.  The continuing rising temperatures in Europe since weeks ago have brought historic drought situations to the continent.