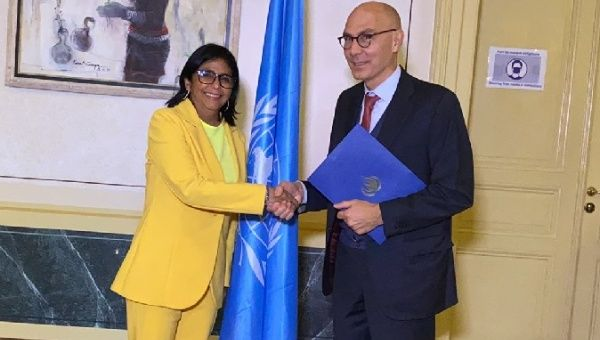 Geneva, November 19 (RHC)-- On Friday, Venezuela's Vice President Delcy Rodriguez held meetings with officials from United Nations agencies in Geneva, where she denounced the consequences of the arbitrary sanctions that the United States and the European Union maintain against her country.

Rodriguez held a meeting with the director of the United Nations Conference on Trade and Development (UNCTAD) Rebeca Grynspan, with whom she discussed issues related to the diversification of Venezuelan exports amid the U.S. blockade.  Subsequently, the Venezuelan vice president ratified the support of the Bolivarian nation for multilateralism during her meetings with Tatiana Valovaya, the director of the UN Office at Geneva, and Volker Türk, the UN High Commissioner for Human Rights.

In these meetings, Rodriguez also denounced the impact of unilateral sanctions on the living conditions and the enjoyment of human rights of the Venezuelan people.  Over the last seven years, these arbitrary sanctions have affected the local provision of social services. In this context, however, the Bolivarian people have shown an exemplary capacity for resilience.

Rodriguez recalled that her country has asked UN representatives to visualize the dimension of U.S.-led sanctions and incorporate it into their bilateral work agenda with Caracas.

On Thursday, she participated in a hearing of the International Court of Justice (ICJ) in which Rodriguez requested to declare inadmissible the demand of Guayana for the Essequibo, a territory that the United Kingdom stripped from Venezuela in the 19th century.