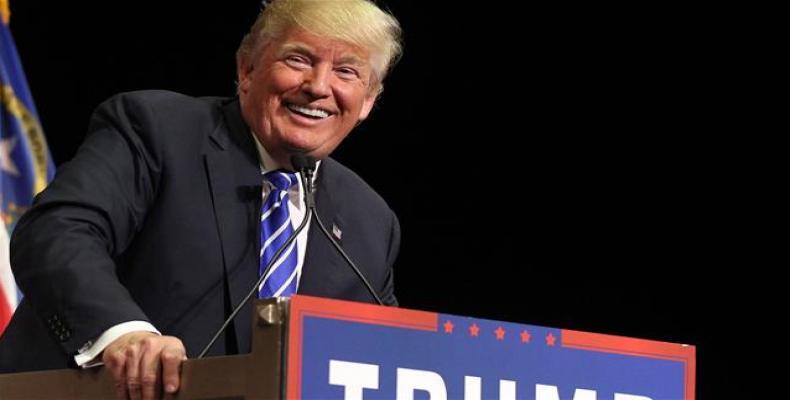 Los Angeles, May 27 (RHC)-- U.S. Republican presidential candidate Donald Trump has secured the required number of delegates to win the nomination of this party.  According to reports from the United States, Trump’s total count of delegates reached 1,238 after a small number of unbound party delegates said they would support him.

Trump was the only remaining Republican candidate in the race after his last two opponents Senator Ted Cruz of Texas and Ohio Governor John Kasich dropped out of the race earlier this month.

It takes 1,237 delegates to win the Republican nomination and there are still 303 delegates up for grabs in five state primaries on June 7.  This means Trump can easily increase his total and avoid a contested convention in Cleveland.

During his rise to the top of the Republican race, Trump eliminated 16 rivals for the party's presidential nomination through a chaotic primary process.  Trump has funded nearly 75 percent of his $57 million campaign and still managed to defeat Cruz, his closest rival, who spent significantly more than $81 million.  Trump’s spending was even lower than the $54 million spent by Florida Senator Marco Rubio, who bowed out of the race more than two months ago.

He is expected to run against Democratic frontrunner Hillary Clinton in the November election.  The RealClearPolitics reported last week that for the first time, Trump had passed Clinton in an average of head-to-head national polls.  Trump was leading Clinton by 0.2 percentage points, defeating her 43.4 percent to 43.2 percent in the average.