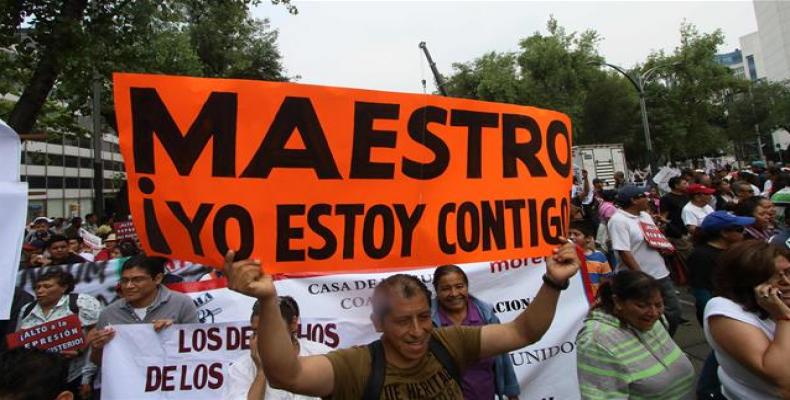 Mexico City, June 27 (RHC)-- Thousands of Mexican protesters have taken to the streets in the capital in support of the country's teachers' union.  Nearly 30,000 people gathered in Mexico City on Sunday to express solidarity with the teachers, protesting planned education reforms and the arrest of their union leaders.

The demonstration was organized by left-wing political party Morena whose leader, Andres Manuel Lopez Obrador, addressed the huge crowd.  The protesters voiced their anger at the government's education reform plans, which seek to end a long-entrenched practice of inheriting or selling teaching positions.

One organizer of the protest said: "Education is what changes Mexico, if the high command are concerned it is because they know that education can change the country and they want an ignorant country - as it has been so far."

The teachers from the National Coordinator of Education Workers, or CNTE, are opposed to the mandatory evaluation testing.  They are also protesting against the arrest of two union leaders on several charges, including money laundering, which the teachers believe are trumped up charges.

Last week, at least six people were killed and more than 100 others injured in clashes between police and members of CNTE, who were protesting planned education reforms in several municipalities in the southern state of Oaxaca.  Clashes erupted when anti-riot police tried to disperse the protesters, who had been blockading roads.

President Enrique Pena Nieto unveiled his education reform plans in 2013 as part of a set of 11 neo-liberal structural reforms implemented in his first 20 months in office.  Since then, teachers have been engaged in protest rallies, mostly in Mexico's southeast states.