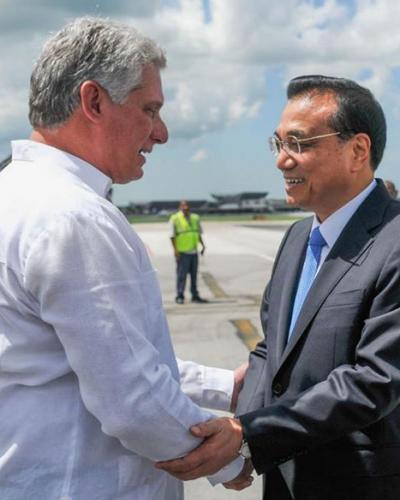 On Sunday, Li Keqiang paid a friendly visit to Cuban revolution leader Fidel Castro. The distinguished visitor took the opportunity to express his satisfaction with this, his first visit to Cuba, his admiration for the patriotism of the Cuban people, and praised the island’s achievements in various fields.

The leader of the Cuban Revolution and the Chinese Premier recalled the historic ties that unite Cuba and China, symbolized by the participation of fighters of Chinese origin during Cuba’s wars of independence and liberation, and the establishment of diplomatic relations between the two countries over fifty-five years ago, when the socialist character of the Cuban Revolution had not yet been declared.

In particular, they shared opinions on the current international situation, the complexities, dangers and challenges and the need to preserve human life and peace.

Fidel and Li Keqiang expressed their confidence that this visit would strengthen cooperation and friendship between the two parties, governments and peoples.

During his stay, the Chinese Prime Minister presided over the signing of several agreements on environment, informatics, industry, biotechnology, renewable energy and banking as well as one to restructure Cuba's debt to China.