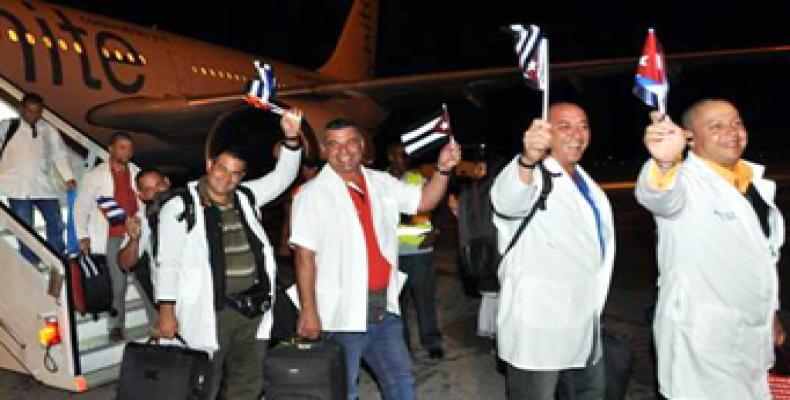 Havana, December 19 (RHC-PL)-- The Cuban medical contingent, who traveled to Haiti in the wake of Hurricane Matthew, returned home over the weekend after providing their services for two months to victims of that powerful storm.

The 38 professionals that make up this latest contingent of Cuba's Henry Reeve Brigade arrived in Haiti on October 8th to reinforce the work being developed by Cuba's already permanent medical teams in Haiti, particularly in the country's southern region.

Upon their arrival in Havana, the health professionals paid tribute to Cuban revolution leader Fidel Castro, who died on November 25th, aged 90. They recalled that it was on Fidel's initiative, and particularly his humanistic and internationalist  approach, that the Henry Reeve Brigade was created to assist victims of natural disasters and serious epidemics anywhere in the world.

The brigade was welcomed at Havana's José Martí airport by Cuban Deputy Health Minister Marcia Cobas, who commended the work carried out by the medical brigade in Haiti, whom she said succeeded in preventing a seemingly inevitable cholera outbreak in the affected areas.

The contingent that has just returned from Haiti is the 24th of the Henry Reeve Brigade that have fulfilled humanitarian missions abroad, since the brigade was created by Fidel Castro in September 2005, in the wake of the devastation caused by Hurricane Katrina in the United States.