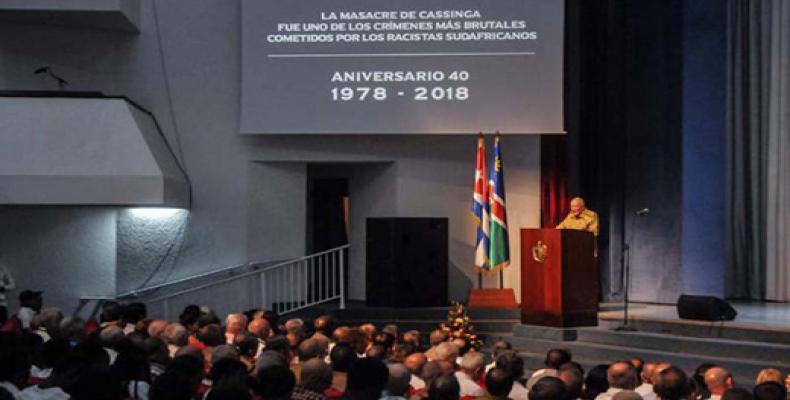 Havana, May 5 (RHC)-- The Cuban and Namibian governments recalled on Friday in Havana the massacre perpetrated by South African army forces against a Namibian refugee camp in Cassinga, Angola, on May 4, 1978.

The apartheid forces aggression against unarmed civilians left more than 600 people killed, mostly women and children, and hundreds of others wounded.

The commemoration of the 40th anniversary of that brutal act was presided over by the first Cuban vice president, Salvador Valdés, the vice president of Namibia, Nangolo Mbumba, and the first deputy minister of the Revolutionary Armed Forces, Army Corps General Álvaro López Miera.

In delivering the keynote speech, Lopez Miera reviewed the events of that day 40 years ago and reiterated the importance of not forgetting the actions that have marked the common history of the Caribbean island and the African nation.

He also said that current collaboration between Cuba and Namibia in education and health shows the friendly relations that unite both countries and which are based on the internationalist legacy of the historical leader of the Cuban Revolution, Fidel Castro.

For his part, Vice President Mbumba thanked the Cubans for their support of the African liberation movements, and asserted that 'the painful memories of Cassinga should serve as a basis to strengthen the bonds and protect the future of the new generations fromsimilar tragedies.'

He also reiterated the support of his country in the fight against the economic, commercial and financial blockade imposed on our country by the United States for almost 60 years, and sent greetings on behalf of the Namibian government to Miguel Díaz-Canel for his recent election as president of the Councils of State and Ministers of Cuba.