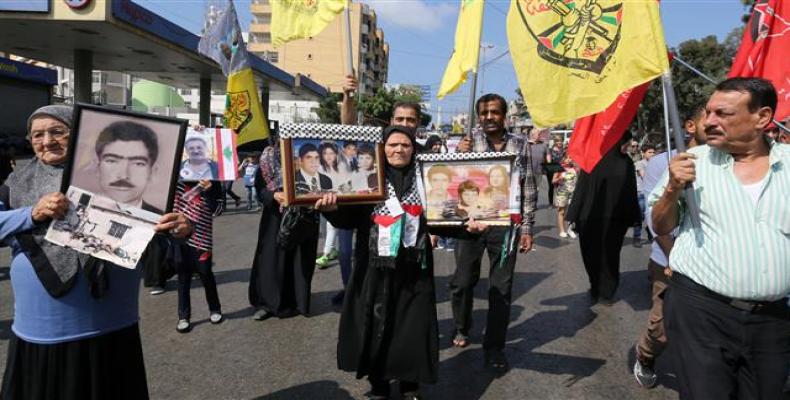 Beirut, September 19 (RHC)-- Lebanon has marked the 34th anniversary of the massacre of hundreds and perhaps thousands of civilians by militias allied with Israel in the Palestinian refugee camps of Sabra and Shatila, with survivors still recounting the horror of the slaughter.

People took part in a march in the Lebanese capital Beirut, in remembrance of the victims of the tragedy.  The demonstrators held portraits showing images of their relatives, who were killed in the carnage.

The Sabra and Shatila massacre was the killing of between 762 and 3,500 civilians, mostly Palestinians and Lebanese Shia Muslims, by Lebanese militias under the eyes of their Israeli allies on September 16-18, 1982.  The killings constituted war crimes and crimes against humanity.

Ariel Sharon, Israel's minister for military affairs in 1982, had overall responsibility for the Israeli forces, who controlled the area of the Sabra and Shatila camps.  An Israeli commission of inquiry found that Sharon, known as the butcher of Sabra and Shatila, bore "personal responsibility" for the massacre as he had decided that Phalangist militias "should be sent" into the refugee camps despite the risk that they would kill civilians there.

Survivors brought a case in Belgium in 2001, calling for the prosecution of Sharon under the country's "universal jurisdiction" law.  However, Belgium's parliament amended the law in April 2003, and repealed it altogether in August, leading the country's highest court to drop the case against the Israeli official that September.

Sharon died in 2014 without facing justice for his role in the slaughter.  Saeb Erekat, the Secretary General of the Palestine Liberation Organization (PLO) said on Saturday that the victims are still awaiting justice.

"Thirty-four years ago an Israeli general, Ariel Sharon, violated an Israeli obligation not to enter West Beirut and facilitated the barbaric massacre of hundreds of Palestinian refugees that were under his control," he added.

Following Sharon's death in 2014, Sarah Leah Whitson, Middle East and North Africa director at Human Rights Watch said "it's a shame that Sharon has gone to his grave without facing justice for his role in Sabra and Shatilla and other abuses."

Ahmed, one of the survivors of the massacre said that the Lebanese militia entered Sabra camp as Israeli soldiers surrounded the area and provided cover.  "The people were in their homes and the camp was free of arms.  Around 400 armed men came in, abusing children, women and elders. They were like a flock of bloodthirsty wolves."