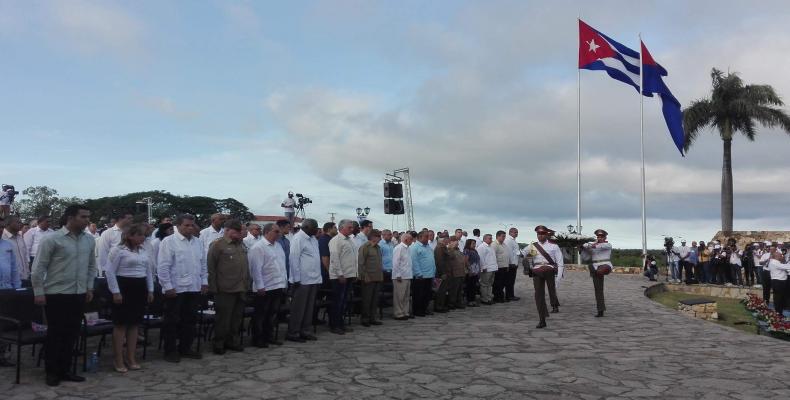 Manzanillo, October 10 (RHC)-- The First Secretary of the Central Committee of the Communist Party of Cuba, Raúl Castro, and President Miguel Díaz-Canel presided over the commemoration ceremony for the 150th anniversary of the beginning of the wars of independence.

At the La Demajagua plantation -- located in eastern Granma province -- where Carlos Manuel de Cespedes freed his slaves and launched the struggle with the Grito de Yara, Cuban President Miguel Diaz-Canel spoke about the unity and resistance of the Cuban people.  He also evoked the stature of the historic leader of the Cuban Revolution, Fidel Castro.

Diaz-Canel referred to the Father of the Nation, Carlos Manuel de Céspedes, and ratified that the struggle begun by the Cuban patriots 150 years ago is the same.

Before dozens of Cuban flags and images of Carlos Manuel de Céspedes and other patriots, some 5,000 people, representing the entire nation, were present at the emblematic site.  During the ceremony, a floral weath was placed in homage to the Father of the Nation and a 21-gun salute was fired.

The activity was also attended by the Second Secretary of the Central Committee of the PCC, José Ramón Machado Ventura.