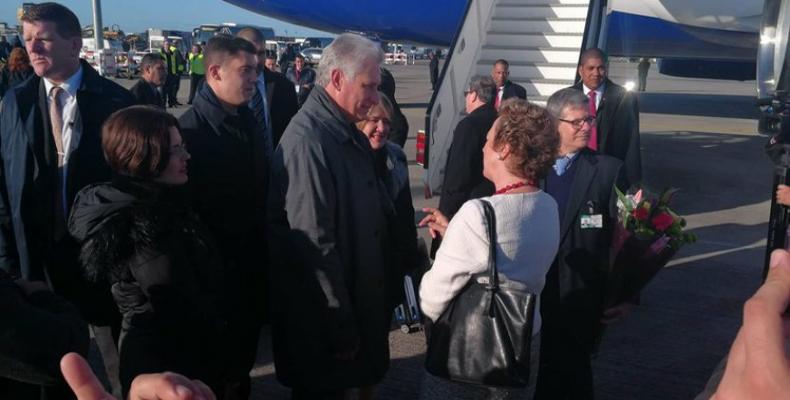 Dublin, October 22 (RHC)—Cuban President Miguel Díaz-Canel, concluded Tuesday a two-day official visit to Ireland. Meeting with its highest authorities he agreed on the need to promote the bilateral relations established 20 years ago.

Since his arrival in Dublin on Sunday, the Cuban Head of State fulfilled a busy program, which included tours of typical places of Irish history and culture, and h talks with his host, President Michael Higgins, and Prime Minister Leo Varadkar.

In both meetings, the parties noted the excellent state of diplomatic ties established on October 27, 1999, and agreed to work to strengthen them.

Although economic exchange with Ireland is scarce and limited to the scientific sphere, there was the talk of extending it to agriculture, renewable sources of energy, biotechnology, education, culture, sports,  and tourism said the Cuban president.

On the political front, Diaz-Canel thanked his hosts for Ireland's position in favor of the resolution against the U.S. blockade of the Caribbean island that Cuba presents each year to the United Nations General Assembly.

Díaz-Canel, the first Cuban president to make an official visit to this European country, closed his activities on Irish soil with meetings with Cuban nationals and with members of the solidarity movement with the Caribbean island.

During the encounter with the Cubans, he briefed them on the measures his government was taking to confront the complicated economic situation caused by the intensification of the hostility of the United States and urged them to join the defense of the nation.

The Cuban president's visit to Ireland is part of a European tour that will take him this Tuesday to Belarus, and then to Azerbaijan and Russia, and responds to a similar one that Irish president Michael Higgins made to Havana in February 2017, where he was received by the then president, Raúl Castro.

The official Cuban delegation consists of Foreign Minister Bruno Rodríguez, Foreign Trade Minister Rodrigo Malmierca, and the director of the European department at the Ministry of Foreign Affairs, Alba Soto.