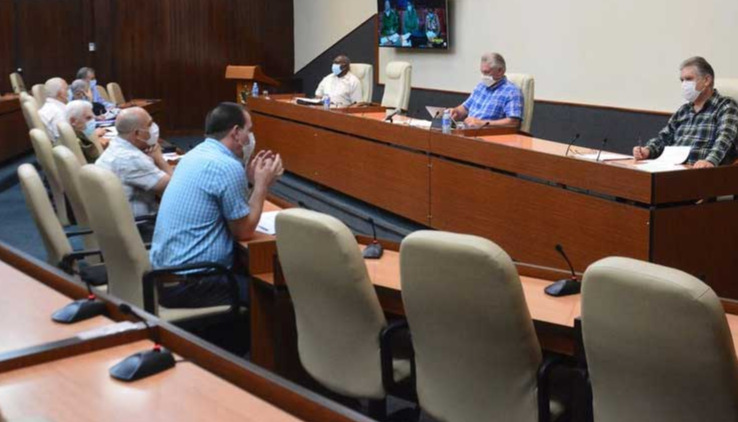 Havana, September 3 (RHC)-- Cuban President Miguel Díaz-Canel Bermúdez insisted Wednesday on the need to work with more agility on each case of the COVID-19 and to make rigorous analyses of what happens daily in the country with the epidemic.

Chairing the daily meeting of the Temporary Working Group of the Government, the head of state pointed out several areas, "in which we have to delve deeper, and that has to start from a thorough analysis of each case."

" First, we have to take a look at the speed with which we detect the sick; second, the depth with which we treat them, and protocols of treatment of vulnerable people have to be taken to the extreme," he said.

Diaz-Canel stressed that when dealing with vulnerable people, whether they have already tested positive or are still under observation, there should not be delays in isolating and treating them immediately with protocols to boost their immune system.

Likewise, Diaz-Canel added, there must be more speed in the performance of the PCR tests, and in obtaining their results, to avoid further contagion and to begin treatments immediately.

Referring to the 17 patients listed in serious condition at the time of the meeting on Wednesday, he considered there was a delay between detection and admission. He urged health authorities to work to expand staff training so that bad practices in dealing with the pandemic can be mitigated or eliminated.

Diaz-Canel reiterated that physical distancing is the primary action to stop the contagion and recognized the attitude of the people of Havana, who responded with discipline on the first night of the new restrictive measures.

However, he cautioned that during the daytime was not the same, given the population's need to look for supplies, particularly for food and cleanliness.

Given that the crowding in lines continues to be a problem amid the spike of transmission of the virus in the capital, Díaz-Canel indicated to the provincial authorities to design new ways to bring the main supplies to the communities and to avoid people having to move massively to the stores