Minister of Public Health: Only cooperation and solidarity can save humanity 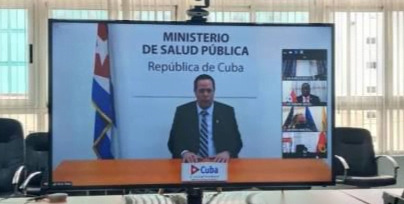 Havana, November 10 (RHC)--  Cuba reiterated that only complementarity among countries will defeat the COVID-19 pandemic.

"We ratify our total certainty that only cooperation and international solidarity will save humanity," affirmed the Cuban Minister of Public Health, José Angel Portal Miranda, in his address to the 73rd World Health Assembly, which took place virtually Tuesday.

Portal stressed that "an unimagined crisis has caused the COVID-19 in the world and no country or sector has been able to escape it". However,  he noted that a lot could be achieved if national efforts were shared.

The  Minister provided the example of the Cuban Henry Reeve Medical Brigade's internationalist work, which has sent 53 contingents of health professionals to help fight the disease in 39 countries, which joined the Cuban medical brigades deployed in 58 nations.

Portal Miranda also noted the importance of designing comprehensive and intersectoral national plans, such as the one implemented by the Island, even before the first cases were reported.

" Cuba's public healthcare system,  with its infrastructure, organization, and human capital, is free and accessible to 100% of the population. It is based on primary health care,  with the family doctor and nurse as its main strength. Together with the use of products, equipment, and novel inputs from the Cuban medical-pharmaceutical and biotechnological industry, it has been decisive in the protection of our people," the minister argued.

He added that these resources have made possible the recovery of 91.3% of infected people in Cuba, and it has prevented the death of vulnerable groups such as children and adolescents.

He pointed out that what Cuba has done to counteract the pandemic, both in the nation and in the international solidarity contribution, has been under the coercive conditions of the blockade imposed by the Government of the United States, and the constant attempts to discredit and hinder the medical cooperation offered by the archipelago.