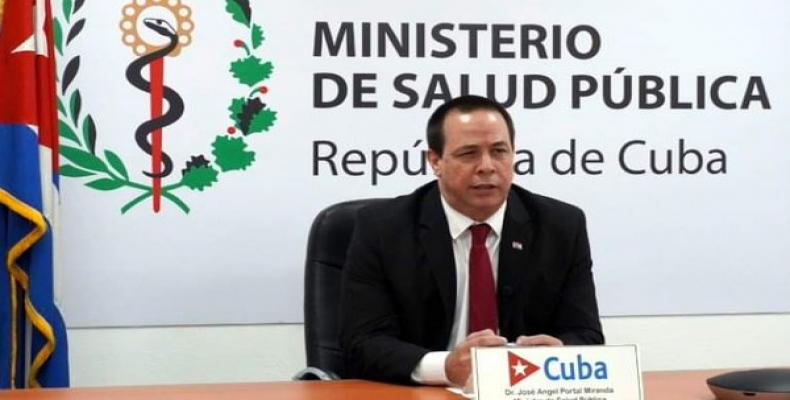 Cuba's Minister of Public Health, Dr. José Ángel Portal Miranda, took part in the 73rd World Health Assembly, which is held annually in Geneva.  This year was a special assembly, because it was held on-line, as leaders and ministers of health from around the world addressed the crucial issue of the fight against the COVID-19 pandemic.

Here is the Cuban health minister's address, delivered on Monday, May 18, 2020.     This is an unofficial English-language translation.

COVID-19 is a global challenge, which does not distinguish borders, ideologies or levels of development.  It has tested health systems around the world and our ability to respond to epidemic events.

When the first cases were diagnosed in Cuba on March 11th, the measures of the National Plan developed in line with the protocols and good practices of the World Health Organization were already being implemented. Their daily monitoring has made it possible to strengthen epidemiological surveillance, guarantee early diagnosis and timely treatment of the disease in Cuba.

Its implementation is supported by a free and resilient health system, with an indicator of nine doctors per thousand inhabitants, allowing for 100% coverage of the population; and also by a medical-pharmaceutical and biotechnology industry, with innovative products for the treatment of the disease such as Interferon Alpha 2B, monoclonal antibodies, CIGB 258 peptide and Surfacen.  Thanks to this, the country is currently in a favorable scenario in the face of the pandemic.

Without ever neglecting the responsibility to protect our people, we have not abandoned the vocation of solidarity of the Cuban Revolution.  More than 2,300 collaborators, organized in 26 medical brigades of the Henry Reeve Contingent, are today contributing to the fight against this disease in 24 countries.  In addition, there are more than 28,000 professionals in 59 countries.

This gesture of solidarity has not been stopped by either the genocidal blockade imposed by the U.S. Government against Cuba -- which has been cruelly intensified -- nor the attempts by that country's administration to discredit and hinder Cuba's international medical cooperation.

No country can face this pandemic on its own.  A global response is required, based on unity, solidarity and renewed multilateral cooperation.

Cuba reiterates to the WHO and its member States its willingness to cooperate and share our modest experiences.