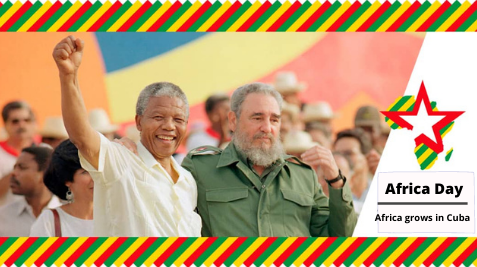 Havana, May 25 (RHC)-- Cuban President Miguel Díaz-Canel said that Africa deserves international solidarity and much more than just one day since the world is indebted to that continent.

On Twitter, on the occasion of Africa Day, the President stressed that this region of the planet demands centuries of attention and the cooperation of all countries.

The world got rich by impoverishing it', the head of state said on the social media network and sent an embrace 'to the continent with which we share ancestors and battles for independence and life'.

Diaz-Canel congratulated the African Union on the date and reiterated his country's solidarity with the peoples of that region, 'with whom common struggles and challenges forged unbreakable ties.

Cuba celebrates Africa Day, a continent with which we are united by history, tradition, and culture', he added.

Also, the island's Foreign Minister, Bruno Rodriguez, highlighted the cultural roots and common historical ties and ratified the solidarity with those peoples.

On Monday, the President of the Cuban Parliament, Esteban Lazo, highlighted the historical links and thanked the African support against the economic, commercial, and financial blockade of the United States.

In a message of greetings and congratulations to the Pan-African Parliament on the occasion of Africa Day, Lazo also ratified the willingness to increase bilateral ties.

In his letter, he recalled the shared history, since the slavery period and the war for Cuban independence, and the participation of more than 300,000 internationalist combatants and civilian collaborators from this land in the struggle against colonialism, domination, racism, and apartheid in Africa.

Lazo also expressed his gratitude for the recognition of the African peoples to the Cuban medical brigades of the Henry Reeve Contingent through the nominations for the Nobel Peace Prize 2021.

The head of the Caribbean legislature expressed his solidarity in the face of the devastation caused by Covid-19 and advocated 'for cooperation and unity as the only alternatives to face the colossal challenges that the pandemic has imposed on humanity.

Africa Day is celebrated every May 25, commemorating the creation of the Organization of African Unity in 1963, which in 2002 became the African Union (AU).