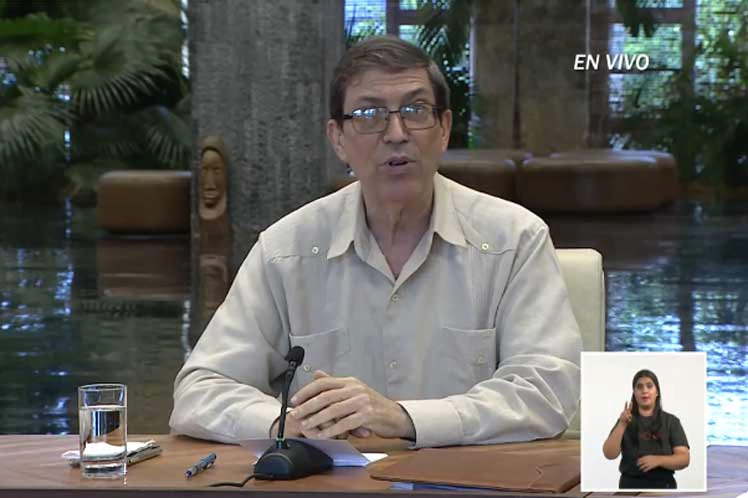 Havana, Jul 12 (RHC)-- Cuban Foreign Minister Bruno Rodriguez denounced the cynicism and hypocrisy of U.S. President Joe Biden, who forgot to mention the blockade as the main cause of the island's economic situation.

The Foreign Minister thus responded to a statement on Cuba by the U.S. president, to whom he suggested listening to the calls to eliminate the siege that has been affecting the families of the Caribbean nation for six decades.

Biden asks Havana to hear the people to alleviate their needs, but maintains the sanctions and the 243 measures imposed by his predecessor, Donald Trump, denounced the head of Cuban diplomacy in a televised appearance on Monday together with President Miguel Díaz-Canel.

Rodriguez clarified that what happened in Cuba on Sunday were disturbances caused by a communicational operation. The White House and its agencies allocate millionaire funds and thus manipulate the Cuban reality and the difficulties of the families.

He specified that the destabilizing actions are promoted from abroad and executed by mercenaries and wage earners who use the shortages to incite chaos.

The Foreign Minister recalled the 1960 memorandum by then-Deputy Secretary of State Lester D. Mallory,  said the measure sought to weaken the Cuban economy to provoke hunger, desperation, and ultimately, the overthrow of the Revolution.

Rodriguez added that on June 23, at the U.N. General Assembly, he alerted the international community on how the U.S. government and right-wing sectors in Florida seek to promote artificial leaders and create a reality that does not exist through social media.

Likewise, he acknowledged the forceful response of the people, who made an attempt to generate chaos to fail and warned that the current scenario is typical of unconventional warfare seeking to generate ungovernability.

The  Foreign Minister thanked those in the world who reacted with respect and confidence in the trajectory of the Cuban government in the face of the events that took place on Sunday.