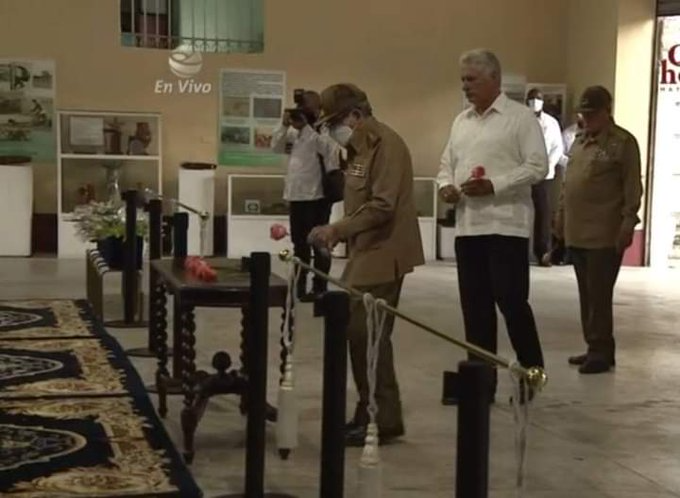 Matanzas, Cuba, Aug 19 (RHC)--The leader of the Cuban Revolution Raúl Castro and Cuban President Miguel Díaz-Canel, paid tribute on Friday to the 14 people who died in the fire at the oil depot blaze in Matanzas Industrial Zone.

Guarded by the people and the honor guard of the General Staff of the Revolutionary Armed Forces, the 14 coffins were placed in the pantheon of the fallen in the line of duty at the San Carlos Borromeo Cemetery where they received military honors.

For a little more than six hours, around 15 thousand people paid their respects and condolences as part of the funeral honors to those who died in the incident that originated in the impact of a lightning strike on one of the crude oil tanks of the supertanker base in the Matanzas industrial zone.

Cuba decreed official mourning on Thursday and Friday. It arranged for an honorary ceremony to be held at the Enrique Estrada Firemen's Station museum, the headquarters of the territory's command 1, one of the first to go to the disaster area.

The experts on the island found 14 groups of remains but could not identify them absolutely because the high temperatures destroyed the sources of evidence: teeth, fingerprints, and DNA.