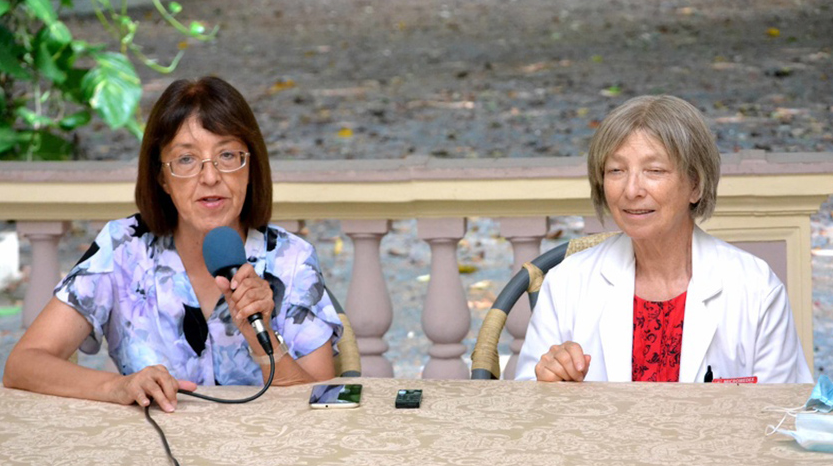 Havana, August 30 (RHC)-- Cuba's friends in the United States will not stop the solidarity work in opposition to the policy of isolation and sanctions against the island, said Gloria La Riva, U.S. journalist, and activist.

In statements to the press in Havana on Tuesday, the candidate of the Socialism and Liberation Party in that country reiterated her commitment to fight for the end of the blockade against the Caribbean nation, a policy she described as genocidal.

La Riva considered that to end this pressure mechanism, it is first necessary to demolish the fallacy of assuming Cuba as a state sponsor of terrorism.

For these reasons, several projects and groups of solidarity with Cuba have deepened their efforts in the HATUEY project, through which a donation of medical supplies arrived on the island on August 26 for the care of those affected by the fire at the Supertanker Base in Matanzas.

La Riva explained that the donation consisted of serums,  surgical gloves, and antibiotics, and they are working to send leukemia medicines in the next shipments.

The activist denounced thUS Cuba, e Biden administration's attempts to criminalize any show of support for Cuba, and expressed her solidarity with the members of the 31st Juan Rius Rivera Puerto Rican Brigade, victims of harassment and persecution by U.S. government agents.

Many people in the United States do not know how harmful their government's policy against Cuba is. The main challenge is to break the silence surrounding the issue and make known how much these measures are hurting the Cuban people, she added.

Dr. Leni Villagomez Reeves, a member of the HATUEY project and member of the Pastors for Peace Friendship Caravan, rejected the cynicism and manipulation behind the sanctions and restrictions that hindered the development of the Cuban socialist project.

He pointed out that the U.S. government is using a challenging moment at a global level to generate suffering and discontent among the Cuban people, all in favor of its annexationist interests.

Many people worldwide support Cuba and see in its system an example of internationalism and humanism, and no one will be able to block this global clamor, she concluded.

Also present at the exchange were Manolo de los Santos, founder and co-executive director of The People's Forum, and Benjamin Samuel Becker, editor-in-chief of Breakthroung News.

HATUEY stands for Health Advocates in Truth, Unity, and Empathy.

It is comprised primarily of health care providers and social justice activists, volunteers concerned about the harmful impact of the economic, commercial, and financial blockade imposed against Cuba.

This way, it focuses on medical aid by acquiring essential supplies and equipment. Since July, two significant donations valued at more than 200,000 dollars have arrived in Cuba.