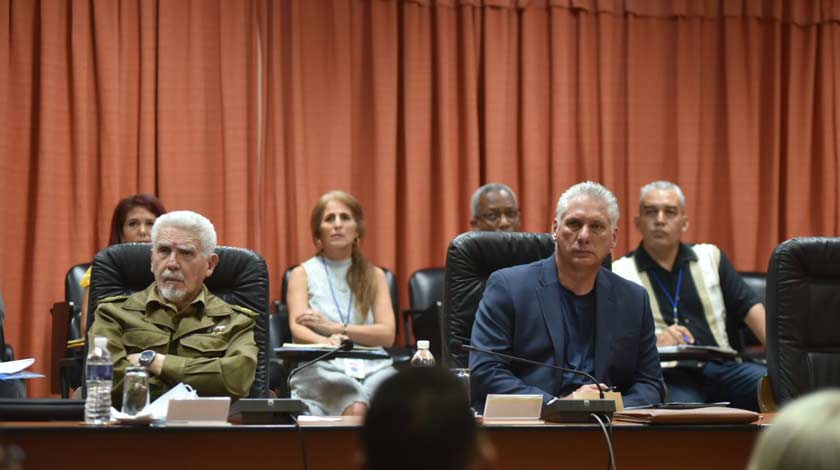 Havana, September 17 (RHC)-- The response of electricity workers to the system's instability has always been honorable and committed, assured President Miguel Díaz-Canel at the National Plenary Session of the National Committee of the National Union of Energy and Mine Workers (SNTEM).

At the meeting held on Friday at the headquarters of the Cuban Workers' Trade Union Federation (CTC), the Head of State reflected in depth on the role of the union at present.

He added that the progress of the electro-energy sector sets the tone for the country's economic and social development, hence the urgency for more significant innovation in the industry, processes, and services.

He reminded participants that there is an imperialist logic that has not ceased in its intention to destroy the Revolution. That is why they focus on economically suffocating the country so that people assume that the limitations are due to the government's inefficiency.

We criticize that blocked economy, sometimes inefficient in some processes. Still, it sustains the Revolution's social work, said Díaz-Canel.

The socialist logic must supersede the imperialist logic to advance toward an independent and sovereign society with the greatest possible social justice and respect for the rights and guarantees of the people.

The President described the impact of the U.S. blockade on the availability of fuel for electric power generation, the redistribution of liquefied gas, the limitations to acquiring spare parts, and the production of nickel.

He urged SNTEM affiliates to focus on the plan set for the sector: to reduce blackouts to a minimum before the end of the year, develop investments and maintenance in 2023 to achieve stability, and change the country's energy matrix gradually.

He called on the union movement to foster the feeling of the workers so that they feel capable of proposing transformations and different ways of doing things and to be listened to by the administrations, whose actions must be transparent.

We will solve problems with the talent and determination of our people, with no room for discouragement; thus, what we do will have more outstanding merit because we will achieve it amid the most adverse situations, said the Head of State.