Cuba denounces double standards of the U.S. regarding our country 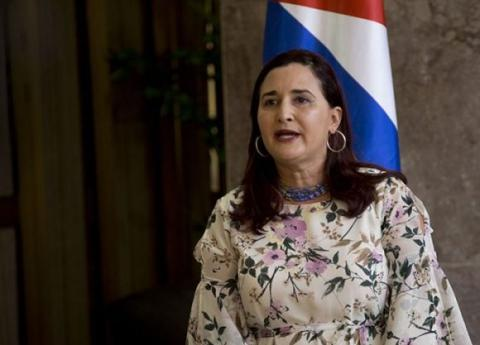 Havana, Oct 1 (RHC) The deputy director general for the United States of the Cuban Foreign Ministry, Johana Tablada, denounced on Friday the double standards of the U.S. government, which claims to support the Cuban people while it applies a tight economic blockade on the country.

In her Twitter account, the Foreign Ministry official stressed that if they wanted to help, they would reverse at least one of the hundreds of measures freely imposed by former President Donald Trump (2017-2021).

In particular, she referred to the inclusion of Cuba in the list of countries that allegedly sponsor terrorism, the fierce persecution of sources of income, and the "medieval punishments" against ships, shipping companies, and fuel or spare parts insurers that have business with the Caribbean nation.

An example of this is the recent sanction of the company CA Indosuez Switzerland S.A. (CAIS), which specialized in wealth management, and will have to pay more than 720 thousand dollars after violating the U.S. measures imposed on several countries.

According to the Office of Foreign Assets Control of the U.S. Treasury Department, the Swiss-based entity violated the sanctions imposed against Cuba, Ukraine, Iran, Sudan, and Syria, since it operated bank and securities accounts of individual clients residing in those territories.

She specifically referred to the period between April 2013 and April 2016, when CA Indosuez Switzerland S.A processed 273 transactions for a total value of three million 76 thousand 180 dollars.

Tablada demanded an end to the million-dollar programs of interference and destabilization against Cuba, as well as to the disinformation operations that seek to hold the country responsible for the consequences of the "inhumane policies of abuse and maximum pressure" of the U.S. government.

The diplomat pointed out that the way to help the Cuban people is to resume the agreements and spaces for dialogue and cooperation, in addition to the use of the president's executive powers to suspend or alleviate some of Washington's coercive measures.

She said that these provisions are not applied to any other country and lack moral or legal support and are based on lies and double standards.

Manolo de Los Santos, co-executive director of The People's Forum and researcher at Tricontinental: Institute for Social Research, agreed with Tablada and said that the United States should learn from Mexico, which has already sent two planes with material aid for hurricane recovery.

It should stop suffocating Cuba with sanctions and plans for regime change, she added on Twitter (Source: Prensa Latina).