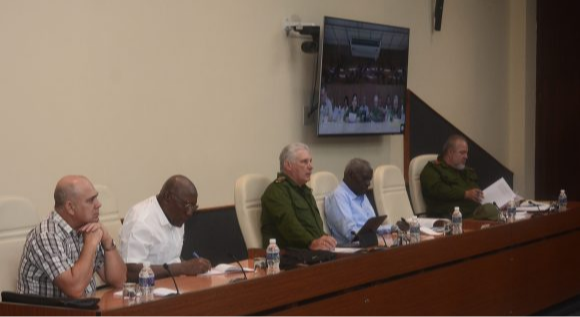 Havana, Oct 11 (RHC) The first secretary of the Central Committee of the Communist Party of Cuba (CC-PCC) and president of the Republic, Miguel Díaz-Canel headed a meeting to examine the recovery efforts after the passage of Hurricane Ian through the western region of the country.

During the meeting, the main authorities of the island learned about the progress made by Pinar del Río in the restoration of electric grid.

The president of the Provincial Defense Council, Yamilé Ramos, said through a videoconference that the water supply is guaranteed in the municipal capitals using the national electric system and generators.

Work is being carried out in social works such as schools, warehouses, medical offices, and roads; and in agriculture, specifically, in 1,918 tobacco houses which require different recovery actions.

They indicated that the school year in the province will resume this week, although some schools are being used as evacuation centers.

The highest authorities of Artemisa confirmed that 96 percent of the electric service is restored and work is being carried out in the municipality of Bahía Honda where the situation is more complex.

Meanwhile, in Havana, efforts are concentrated on cleaning up and resolving the damage to homes.

The Cuban head of state called to solve the problems of the offices of procedures, to speed up the delivery of construction materials, to make further progress in the solution of the electrical damages, and to provide facilities for cooking food. (Source: PL)