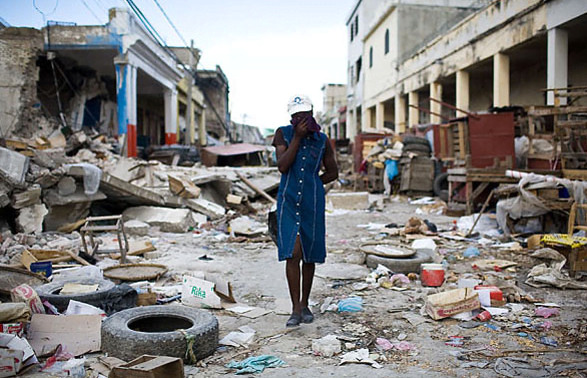 The poverty of Haiti is the result of centuries of exploitation

Over the last few weeks, Haiti has made the headlines due to the protests organized by political parties and other social sectors to demand the removal from power of President Jovenel Moïse -- who has the support of the United States and the Organization of American States, OAS.

Whenever someone speaks about this Caribbean nation that shares the island of Hispaniola with the Dominican Republic, it is almost always referred to as the "poorest country on the continent," which is true, albeit it has nothing to do with geography.

The first Slave Revolution took place in Haiti, and concluded with the triumphant proclamation of independence from France on January 1, 1804, which today costs them dearly due to the subsequent alliance of the European metropolis with the United States.

Threatened by French gunboats lined up off Port-au-Prince ready to destroy the city, the young government was forced to pay a ransom for each freed slave to compensate their former masters.

This requirement remained in force until World War II and to comply with it, Haiti had to assume onerous loans from French and American bankers.  At the current exchange rate, it is estimated that the amount paid is equivalent to some 21 billion dollars, which would have been enough to contribute with the country’s development.

Nonetheless, this is not the only cause for the misery and deprivation suffered by this sister nation.  For over 60 years, the United States refused to recognize the country's independence and in the 20th century did everything possible to turn it into ashes.

Washington carried out several invasions since 1910, when then President William Taft sent in the Marines to "protect" a group of financiers who had supposedly “bought" the National Bank of Haiti.

For 31 years, the United States sponsored the Duvalier dictatorships and then imposed presidents that were following Washington's dictates.  And whenever a Haitian leader stepped out of line -- such as Jean Bertrand Aristide -- U.S. orchestrated not one, but two coups d'états to put in their favorite.

However, nothing illustrates better how the U.S. destroyed Haiti than what happened during the Bill Clinton administration.  Until then, Haiti did not import rice, because they produced more than they consumed.  But they were forced to lower tariffs from 40 to 3 percent on rice and it turned out that the U.S. rice was much cheaper than the local one.  Tens of thousands of farmers were ruined.

And, coincidentally Tony Rodham, Hillary Clinton's brother, was involved in this rice business, as well as in the extraction of Haitian gold, which caused serious damage to the environment.

This is just a brief and simple sketch of the actual situation.  In upcoming commentaries, we’ll examine the outrages of the UN missions and the wrongly named "reconstruction" of Haiti after the 2010 earthquake.