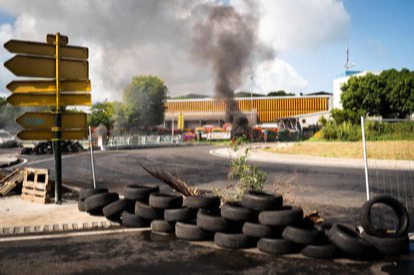 The drastic measures to contain the contagion of COVID-19, as well as the obligation to be vaccinated against that disease, were the apparent causes of the angry protests that are shaking these days Guadeloupe and Martinique, overseas territories of France.

I say they are apparent because, although the unrest erupted after the Paris decision that all health personnel must be immunized or lose their jobs, the real reasons lie much deeper, in the quasi-colonial conditions in which the inhabitants of these islands live.

As will be recalled, the demonstrations, road blockades and clashes with the police began in Guadeloupe and then spread to neighboring Martinique, where the unions called for a general strike.

Cholera, however, is not exactly against vaccines and the mandatory health pass.

What is happening now is a sort of repetition of the events of 2009 when a general strike paralyzed these islands for a month and a half in protest against the high cost of food, unemployment and low wages, unable to cover the needs of families.

These are common complaints in these places which, although they have the official status of French departments and territories, suffer a standard of living markedly inferior to that of the European metropolis.

The root of the problem dates back to the 1950s, when France had no choice but to put an end to the colonial regime and even to accept the total independence of some territories in Africa and Asia.

The idea was then conceived of maintaining control and sovereignty in various parts of the planet, appealing to the guise of a supposed territorial and administrative integration, which replaced on paper the colonial status.

Thus were born the "overseas departments and territories", among them Guadeloupe, Martinique, St. Martin and St. Barthélemy in the Caribbean; Guyana in South America; St. Pierre and Miquelon in the North Atlantic; Reunion Island and Mayotte in the South Indian Ocean; New Caledonia, Wallis and Futuna in the Pacific.

In addition, there are more than one hundred small islands and islets in Oceania and some southern and Antarctic lands. If these areas are added together, they give the not inconsiderable figure of 120,000 square kilometers of surface area and millions of miles of sovereign sea, with immense natural wealth over which Paris has power.

It is not true, however, that the quality of life and comfort of continental European France are replicated in these places, far from it, and that is the embryo of a potentially explosive situation, which one day, sooner or later, will have to be definitively resolved.