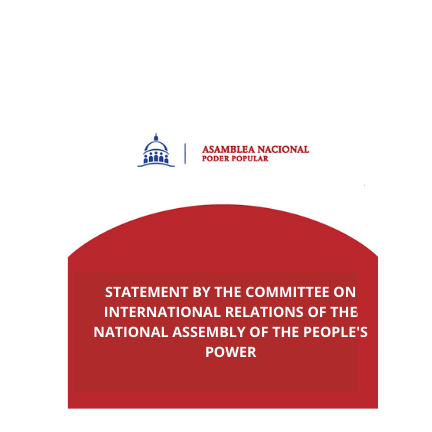 Havana, June 10 (RHC)--The International Relations Committee of the National Assembly of Peoples Power (Parliament) of Cuba issued a declaration on Thursday rejecting the adoption by the European Parliament of a Resolution.

Once again, the European Parliament has played the sad role of hostage of a small group of extreme right-wing MEPs obsessed with destroying the Cuban Revolution. They have a proven link with Miami-based organizations financed by the U.S. government.

The spurious and interfering resolution that has just been approved in the European Parliament undermines the credibility of that institution and reflects the double standard towards the Cuban nation. There is no intention in it to cooperate or dialogue, nor the slightest expression of respect for Cuba as a free, independent, and sovereign country.

We reiterate our strong rejection of this monstrosity promoted by the most extremist representatives of the Spanish political groups Partido Popular and Vox, who have no moral authority to judge Cuba and who have transferred their internal political quarrels against the current executive of that country to the European Parliament.

In the face of the violent, vulgar, and neo-fascist rhetoric of this minority group of Euro-parliamentarians, dignified voices were raised to expose the truth about Cuba and described this action as hypocrisy. They referred to the U.S. blockade as the most flagrant violation of the human rights of the Cuban people and demanded its elimination while defending the development of a respectful and constructive relationship between Cuba and the European Union.

Such a resolution, plagued by double standards, does not disturb our sleep. Cuban legislators, together with the people we are an inseparable part of and to whom we owe ourselves, work to strengthen the normative structure of our nation, which prioritizes the full enjoyment of all human rights for all people.

In Cuba, culture is universal in scope, and the State preserves the ever-widening access of the people to all its manifestations. Cuban medical cooperation, from which European peoples have also benefited, is a paradigm of the Revolution's external projection based on Martí's principle that "Homeland is humanity."

The campaigns promoted by our enemies and their lackeys fail in the face of the will of our people to continue advancing united in the construction of an increasingly just and democratic society.

The reason is and will be our shield.

International Relations Commission of the National Assembly of People's Power of the Republic of Cuba.