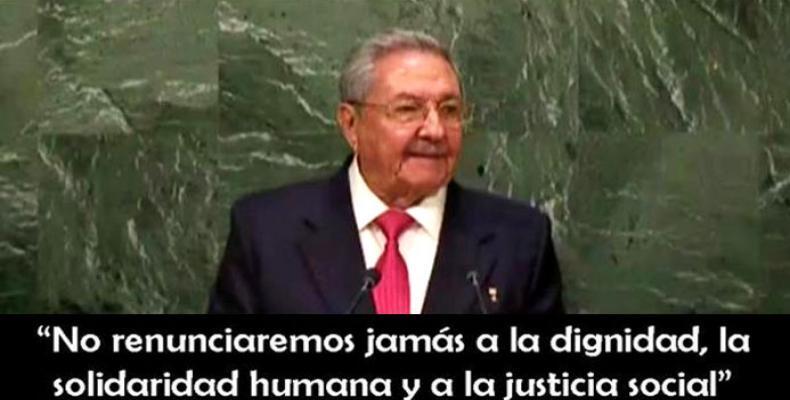 Remarks by Raúl Castro Ruz, President of the Councils of State and Ministers of the Republic of Cuba, in his address to the United Nations Summit for the Adoption of the Post-2015 Development Agenda, New York, September 26, 2015

The current instability prevailing in numerous regions of the world has its roots in the pervasive underdevelopment afflicting two-thirds of the world population.

The Post-2015 Development Agenda seems ambitious but enthusiasm should not make us oblivious to reality.

Fifteen years after the adoption of the Millennium Development Goals progress is insufficient and unevenly distributed. In many cases, unacceptable levels of poverty and social inequality persist and even aggravate including the industrial nations. The gap between the North and the South widens, and wealth polarization keeps growing.

We realize that a long distance must still be covered to achieve a real world association for development.

No less than 2.7 billion people in the world live in poverty. The global infant mortality rate for children under five years of age is still several times higher than that of developed countries. Likewise, maternal death in developing regions is fourteen times higher.

Amid the existing economic and financial crisis, wealthy individuals and transnational companies are growing richer while the number of poor, unemployed and homeless people increase dramatically as a result of the harsh so-called “austerity” policies, and waves of desperate immigrants arrive in Europe escaping misery and conflicts that others have unleashed.

The resources needed for the implementation of the Agenda, lacking measurable commitments and timetables, are inadequate to meet the seventeen objectives of sustainable development.

If we wish to make this a habitable world with peace and harmony among nations, with democracy and social justice, dignity and respect for the human rights of every person, we should adopt as soon as possible concrete commitments in terms of development assistance, and resolve the debt issue, a debt already paid several times over. It would be necessary to build a new international financial architecture, remove monopoly on technology and knowledge, and change the present international economic order.

The industrial nations should accept their historic responsibility and apply the principle of “common but differentiated responsibilities.” The lack of resources cannot be used as a pretext when annual military expenses amount to 1.7 trillion dollars; absent a reduction of such expenses neither development nor a stable and lasting peace will be possible.

The reestablishment of diplomatic relations between Cuba and the United States of America, the opening of embassies and the policy changes announced by President Barack Obama with regard to our country constitute a major progress, which has elicited the broadest support of the international community.

However, the economic, commercial and financial blockade against Cuba persists bringing damages and hardships on the Cuban people, and standing as the main obstacle to our country’s economic development, while affecting other nations due to its extraterritorial scope, and hurting the interests of American citizens and companies. Such policy is rejected by 188 United Nations member states that demand its removal.

Nevertheless, Cuba fulfilled the Millennium Development Goals and offered its modest cooperation to other developing nations in various areas, something we shall continue to do to the extent of our limited capabilities.

We shall never renounce honor, human solidarity and social justice, for these convictions are deeply rooted in our socialist society.