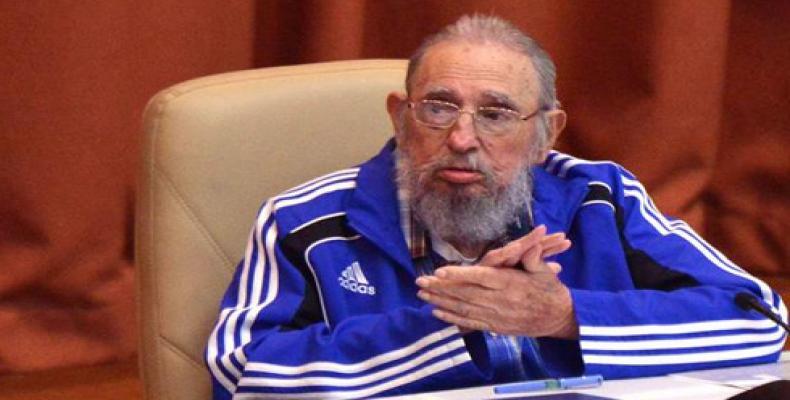 Remarks by leader of the Cuban Revolution, Fidel Castro Ruz, during Tuesday's closing session of the 7th Congress of the Communist Party of Cuba

It is a superhuman effort to lead any people in times of crisis. Yet without them, the changes would be impossible. In a meeting such as this, which brings together more than a thousand representatives chosen by the revolutionary people themselves, who delegated their authority on them, it is for all of them the greatest honor they have received in their lives, with the added privilege of being revolutionary, which is a product of one’s own consciousness.

Why did I become a socialist, or more plainly, why did I become a communist? This word expresses the concept most distorted and maligned in history by those who have the privilege of exploiting the poor, the dispossessed, ever since they were deprived of all the material wealth that work, talent and human energy provide. Since when has man been living through this dilemma, throughout time without end? I know you do not need this explanation but perhaps some listeners do.

I am simply speaking so it is better understood that I am not ignorant, extremist or blind, nor did I acquire my ideology of my own accord by studying economics.

I did not have a tutor when I was a law and political sciences student, subjects in which they have a great influence. Of course. I was then some 20 years old and was fond of sports and of mountain climbing. Without a tutor to help me in the study of Marxism-Leninism; I was no more than a theorist but, of course, I had total confidence in the Soviet Union. Lenin's life work desecrated after 70 years of Revolution. What a historic lesson! It may be affirmed that another 70 years will not go by before another event like the Russian Revolution occurs, in order for humankind to have another example of a magnificent social revolution, one that meant a huge step forward in the struggle against colonialism and its inseparable companion, imperialism.

Perhaps, however, the greatest danger hanging over the Earth today derives from the destructive power of modern weaponry, which could undermine the peace of the planet and turn impossible the existance of human life on the earth’s surface.

The species would disappear, like the dinosaurs disappeared; perhaps there will be time for new forms of intelligent life to emerge, or maybe the sun’s heat will increase, melting all the planets of the solar system and their satellites, as a large number of scientists forecast. If the theories of several of them are true, which we laypeople are not unaware of, the practical man must learn more and adapt to reality. If the species survive for a much longer span of time, the future generations will have greater knowledge  than we have. But first they will have to solve a huge problem. How to feed the billions of human beings whose realities are inevitably at odds with the limited drinking water and natural resources they need?

And some or perhaps many of you might be wondering: where is politics in his speech? Believe me I am sad to say it, but politics is here, in these moderate words. Let us hope that many are the human beings that would be concerned over these realities, so we do not continue as in the times of Adam and Eve, eating forbidden apples. Who will feed the thirsty people of Africa with no technology at their disposal, no rain, no dams, no more underground reservoirs than those covered by sands? We will see what governments say, governments almost all of which signed the climate commitments.

We must constantly hammer away at these issues and I do not want to elaborate beyond the essentials.

I shall soon turn 90. Such an idea would have never occurred to me. It has not been the result of an effort; it’s been sheer chance. I will soon be like everyone else. We all reach our turn. But the ideas of the Cuban communists will remain, as proof that on this planet, working with fervor and dignity the material and cultural wealth that humans need can be produced, and we must struggle relentlessly to obtain it. To our brothers in Latin America and the world we must convey that the Cuban people will overcome.

This may be one of the last times that I speak in this room. I voted for all the candidates submitted for election by the Congress, and I appreciate the invitation and the honor of you listening to me. I congratulate you all, and firstly, compañero Raúl Castro, for his magnificent effort.

We will march on, and we will improve that which should be improved, with utmost loyalty and united force, as did Martí, Maceo and Gómez, in an unstoppable march!