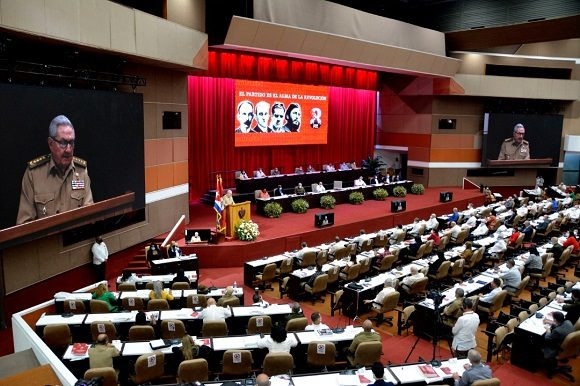 Havana, April 16 (RHC) --The main report to the 8th Congress of the Cuban Communist Party provided a critical assessment of the island's undertaking since the previous Congress held five years ago.

The event, which will last until April 19, is attended by 300 delegates, among them the President of the Republic, Miguel Díaz-Canel.

In the introductory words to the event, the second secretary of the Party, José Ramón Machado Ventura, said that workers, peasants, intellectuals, combatants, retirees, with gender and ethnicity representative of the Cuban society, were elected.

He stressed that 94 percent of the delegates are university graduates.

In delivering the main report, Raul Castro stressed the Cuban economy resisted the tightening of the blockade imposed by the United States and the crisis caused by the pandemic, without renouncing development or solidarity support to other nations.

However, he was emphatic in pointing out deficiencies that hinder the necessary take-off of the Caribbean country.

He identified structural problems of the economic and social model and urged to make the process of its updating more dynamic, with emphasis on better planning and at the same time the necessary decentralization in the business sector and at the territorial level.

He said that it is necessary to improve the investment process and enhance productivity and efficiency in the state sector of the economy and the institutionalization of non-state forms of management.

He recalled that recently the number of private productive activities allowed grew from 127 to more than two thousand but rejected the claims of those who bet on capitalist restoration and privatization of the primary means of production.

There are limits-Raul Castro stressed- that we cannot exceed because they would lead to strategic errors and the destruction of socialism, sovereignty, and independence.

In his speech, he called for a 'shaking up' of state business structures to banish lack of initiative and conformism, among other 'bad habits, ' and develop entrepreneurial and proactive traits in business leaders.

He urged to cement a true change in mentality to defend the increase of production, particularly food, and eliminate the bad 'habit' of importing.

Otherwise, it would be committing a mistake repeated in several stages; he pointed out and remarked that saving is the fastest and safest income in Cuba's conditions.

After the moring session, and the presentation of the main report,  the delegates began working in three commissions.