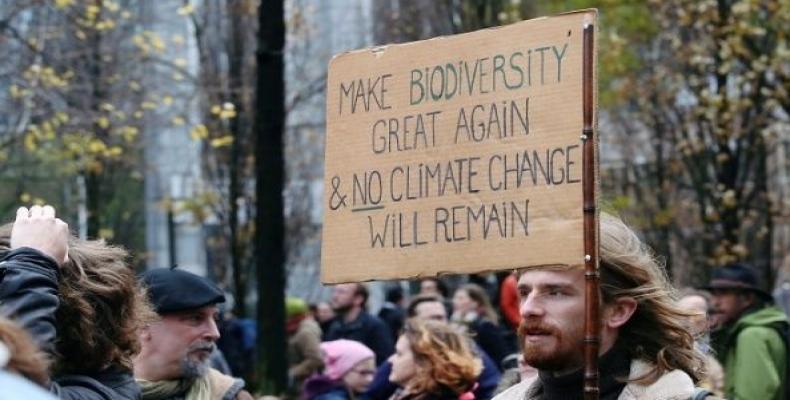 Brussels, December 4 (RHC)-- Thousands marched in Brussels urging the Belgian government to respect its commitments on countering climate change as a United Nations conference on keeping global warming in check got underway in Poland.

Belgian police said some 65,000 people participated in the "Claim The Climate" demonstration, calling for "ambitious" climate policies to limit global warming to 1.5 degrees Celsius in line with goals set by the Paris Agreement in 2015.  Demonstrators marched through the quarter of the Belgian capital that houses the headquarters of the European Union, with banners bearing slogans including "There is no planet B" and "Climate First, Politics Second."

The Brussels demonstration coincided with the beginning of a two-week U.N. summit on climate change in the Polish city of Katowice.  Even solid progress on the Paris goals may not be enough to prevent runaway global warming, as a series of major climate reports have outlined.

In a rare intervention, presidents of previous UN climate summits issued a joint statement as the talks got underway, calling on states to take "decisive action... to tackle these urgent threats."   "The impacts of climate change are increasingly hard to ignore," said the statement, a copy of which was obtained by AFP.  "We require deep transformations of our economies and societies."

"Climate change impacts have never been worse," Patricia Espinosa told journalists after the first negotiating session.  "This reality is telling us that we need to do much more."  The climate change conference in Poland came just days after U.S. President Donald Trump stood as the sole leader at the G-20 summit who did not sign on to a statement reaffirming support for the Paris agreement.  Last year, Trump announced the U.S.’s withdrawal from the international agreement.