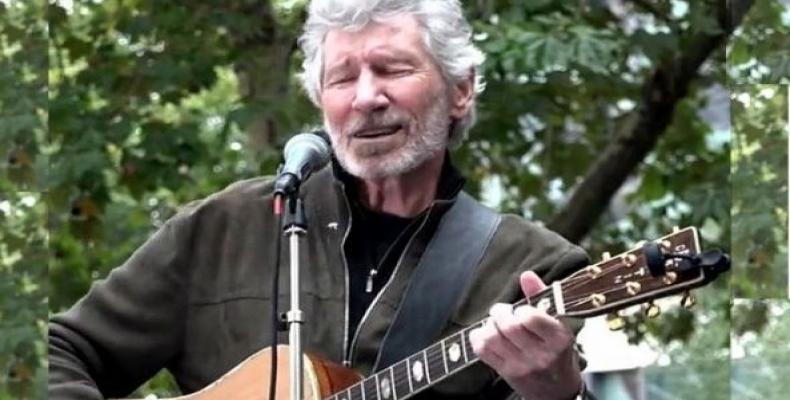 London, September 3 (RHC)-- Rock ’n’ Roll legend and former front-man of Pink Floyd Roger Waters performed Monday one of his hit songs ‘Wish You Were Here’ outside the United Kingdom’s Interior Ministry in London during a rally in solidarity with WikiLeaks co-founder Julian Assange.

The British activist is a long-standing supporter of Assange and WikiLeaks and staunch opponent of the United States imperialistic practices, publicly criticizing the unilateral sanctions against Venezuela, the lawfare strategy and jailing of Brazilian former president Lula da Silva, and challenging far-right leaders around the world.

After playing the iconic song, during Monday’s support demonstration, Gabriel Shipton, Assange’s brother detailed that after visiting Assange, he could see that “Julian is emaciated and not in tip-top order or health... he is suffering anxiety.  He is still in fighting spirits, but his well-being is declining rapidly.”

Despite Julian Assange formally denying his consent to an extradition request before the Westminster Court of Magistrates in London, he now faces a full U.S. extradition hearing in February 2020.

"I do not wish to surrender for extradition.  I'm a journalist winning many, many awards and protecting many people," said Assange who testified by video conference from the Belmarsh maximum-security prison, where he is imprisoned after having been condemned by another British court to 50 weeks of jail for violating his conditional freedom in 2012.

The U.S. Justice Department has mounted 18 charges in total against him, with accusations of conspiring with former Army intelligence analyst Chelsea Manning to gain access to a government computer as part of a 2010 leak by WikiLeaks of hundreds of thousands of U.S. military reports about the wars in Afghanistan, Iraq and American diplomatic communications.

“I spoke to Julian Assange at the weekend.  His psychological torture is unabated.  He remains isolated in his small cell, mostly 23 hours a day, denied proper exercise.  He has lost more weight. Although 'approved', phone calls to his parents are still not possible,” Pilger tweeted.

Campaigners for Julian Assange’s freedom are not the only ones with serious concerns about the way Assange has been treated.  In May, U.N. rapporteur Nils Melzer visited Assange in prison and said that “physically there were ailments but that side of things are being addressed by the prison health service and there was nothing urgent or dangerous in that way.  What was worrying was the psychological side and his constant anxiety.”