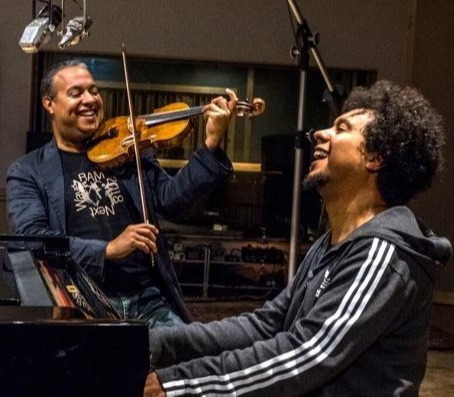 Havana, April 30 (RHC)—The first album by the duo made up of Aldo López-Gavilán and his brother Ilmar is nominated to the 2020-2021 Cubadisco Awards in the category of instrumental music.

The duo is currently promoting their CD entitled ‘Brothers’ in the United States, as part of a hybrid concert tour, which combines "live" ... in-person presentations and virtual performances, of cities like Detroit, Michigan, Napa, Chicago, Minnesota, New York, Cincinnati, Indianapolis, among others.

Brothers, to be released soon on digital platforms, includes ten tracks –all of them composed by Aldo López-Gavilán, with arrangements for piano and violin by the two brothers. The album was conceived in 2019 in the context of several presentations of the duo in New York.

The performances in the US also led to the shooting of the documentary Los Hermanos / The Brothers, by US filmmakers Marcia Jarmel and Ken Schneider. The documentary has been exhibited in some dozen film festivals in the US and was also recently broadcast on PBS.

A violinist trained in the former Soviet Union, Spain and the United States, where he currently resides, Ilmar López-Gavilán has performed in some of the world’s top concert halls. A multi-award-winning musician, in 2012 he won a Grammy with his Harlem Quartet. He has performed and recorded with such renowned musicians as John Pattituci, Winton Marsalis and Chick Corea.

Aldo López-Gavilán is considered a virtuoso pianist with a long, fruitful career during which he has shared on stage with Cuba’s National Symphony Orchestra, New England Conservatory Youth Symphony, Bogota Philharmonic Orchestra, Sao Paulo Jazz+ Orchestra and the “Simón Bolívar” Youth Symphony of Venezuela, among others. He has recorded 13 albums, 5 of which have been nominated to Cubadisco Awards, including ‘El ocaso de la hormiga y el elefante,’ the winner of the coveted prize in 2000.

Cubadisco is the Cuban music industry annual awards festival, held every May. Last year it had to be cancelled due to the pandemic so this year it is back bigger and better with over 360 nominations and more categories. The 2020-2021 edition will be held May 15th through the 23rd, with Spain as guest country of honor.