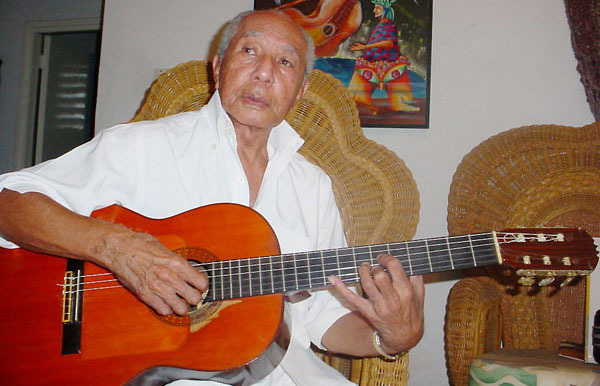 During the academic space, in the framework of the 37th Jazz Plaza International Festival, renowned tres guitar player Pancho Amat and young multi-instrumentalist Janio Abreu spoke extensively about the vast work of Portillo, who was also one of the greatest exponents of bolero music in Cuba.

Amat recalled the time, when he first met Portillo de la Luz, during a concert in 1967. He said it was then, when he first realized the exquisite elegance and beauty of Portillo’s song lyrics.

Pancho Amat stressed that from then on, his admiration for the author of ‘Contigo en la distancia’, ‘Tú mi delirio’, ‘Noche cubana’ and ‘Canción de un festival’, grew exponentially.

Janio Abreu, for his part, said Portillo’s tunes include elements of jazz. He pointed to the harmony, other technical elements and specially the use of clarinet.

During Wednesday’s session of the Colloquium, Amat and Janio performed their own versions for tres guitar and clarinet, respectively, of some of the most iconic, best known pieces composed by César Portillo de la Luz. They spoke also about his improvisations and his vast knowledge of music theory.

Wednesday’s Colloquium, in the framework of the 37th Jazz Plaza International Festival, was streamed on the Facebook Channel of the Cuban Ministry of Culture. The program included footage from some of Portillo de la Luz’s frequently televised recitals and fragments of interviews that he granted, speaking about his work and Cuba’s ‘feeling’ musical movement, of which he was a pioneer.

Portillo de la Luz was awarded the Premio Latino a Toda Una Vida by the Spanish Academy of the Arts and Lyrics of Music at a ceremony held in Madrid in 2004. His songs have been performed by many well-established artists worldwide, including Nat King Cole, Luis Miguel, Christina Aguilera, José José and Lucho Gatica.