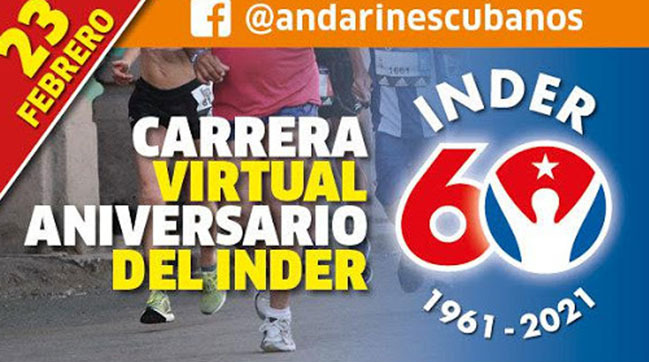 The National Institute of Sports, Physical Education and Recreation (INDER) is running a virtual race.

Havana, February 22 (RHC)-- The National Institute of Sports, Physical Education and Recreation (INDER) is running a race that will take place virtually and in person on Tuesday and Wednesday -- commemorating the 60th anniversary of its founding (February 23, 1961).

The director of the Marabana-Maracuba project, Carlos Gattorno, told the Cuban News Agency that despite the COVID-19 pandemic, he is confident in the success of the event.  "I am sure that there will be a good participation and the response of the population will again be a Yes for Life," Gattorno said.

He added that in each province the race began on Monday at 9:00 a.m., and reiterated that those interested in participating can do so individually or in teams.  He also stressed that from different parts of Cuba, including rural and mountainous areas, the enthusiasm of its inhabitants to take part in these days of physical exercise can be perceived.

He also stressed that a significant number of foreigners will join the call from their countries, especially Spain, Italy, the United States, Mexico, Colombia, Venezuela and France.

"All of them will send this information with photos or videos to Andarines Cubanos, on whose Facebook site they will be able to access their certificates of participation in an activity that has the technical support of the Marabana-Maracuba project," he explained.

Gattorno expressed his appreciation for the full support of the management of the sports organization for the success of the race.