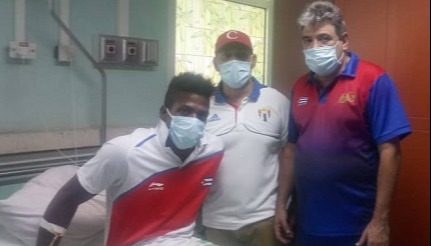 Medina in the hospital after the operation. (Photo: Prensa Latina)

Sancti Spíritus, February 25 (RHC)-- The recovery of Pinar del Río pitcher Frank Luis Medina is progressing as expected by the medical team that operated on him at the Camilo Cienfuegos Hospital in Sancti Spiritus.

A day after being treated as a result of an inguinal hernia whose symptoms increased, the relief pitcher enjoyed on Wednesday the victory with which his team tied 2-2 the battle with Granma for a place in the final of the 60th National Baseball Series.

"We appreciate his good spirits and the specialists who are treating him confirmed that he is evolving satisfactorily," said Dr. Francisco Montesinos, chief medical officer of the Cuban federation, who visited the athlete along with commissioner Ernesto Reinoso.

Although Medina's absence is a hard blow for the Vegueros, they won the game by a score of 5 to 3 in a duel that marked the return of the experienced Yosvani Torres, who had not officially pitched since November, when he closed his work in the Spanish league.

"I am grateful for the opportunity that the team management offered me, because despite not being in good shape, I really wanted to defend the jersey of my province," he said after a five-inning opening in which he allowed all the scores of the Granmenses.

The credit was given to reliever Yoandy Cruz, who barely withstood a hit in four episodes and was supported by his team, who finished with three in the sixth.

"I prepared myself mentally since yesterday, because after we learned about Frank Luis Medina's surgery I knew I would have to go out when Torres released the game, and I am very satisfied with the way things turned out for me against a team that is very good offensively," said Cruz.