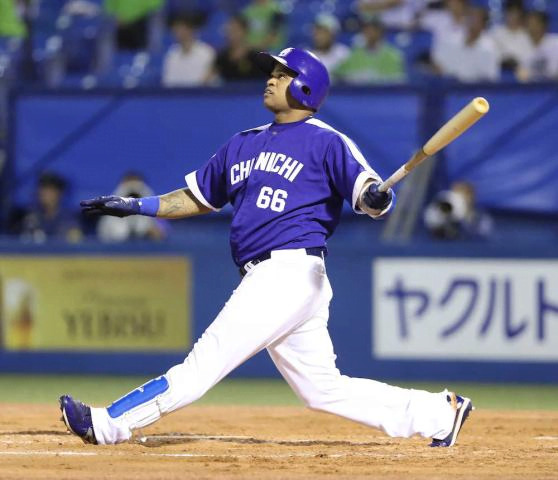 Cuban slugger Dayan Viciedo hit his 17th home run of the season today in his team's 3-7 loss to Hiroshima Carp.

Viciedo, the Dragons' starter, also hit a single in four at-bats and drove in a run at the plate, leaving his totals at .279 and 67, respectively.

His compatriot and catcher Ariel Martínez, came on as an emergent and fired an uninterrupted hit to raise his average to .217.

Meanwhile, Villaclareño Leonys Martín, hit his 26th home run of the contest plus a single to support the 4-2 success of Lotte Marinos over Seibu Lions.

At the ZOZO Marine stadium in Chiba, the former Seattle Mariners outfielder went 3-2 to increase his batting average to .252 and his RBI total to 72. His compatriot Adeiny Hechavarría, meanwhile, hit a home run in three visits to home play, scored a run and left his average at .195.

Another Latin American who stood out on the day was the Dominican Mel Rojas Junior, who hit his seventh four-corner hit and a double to drive in the runs that gave the Hanshin Tigers a 2-0 win at the expense of the DeNa Stars.   At Yokohama Stadium, in addition to the Dominican outfielder, Venezuelan reliever Robert Suárez, who pitched a blank inning to record his 38th save of the season, setting a record for a Latin reliever in the league.

With their victory, the Hanshin Tigers remain one game behind the leader of the Central League, Golondrinas de Yakul, while in the Pacific League, the Orix Buffaloes are half a game ahead of the Lotte Marinos.