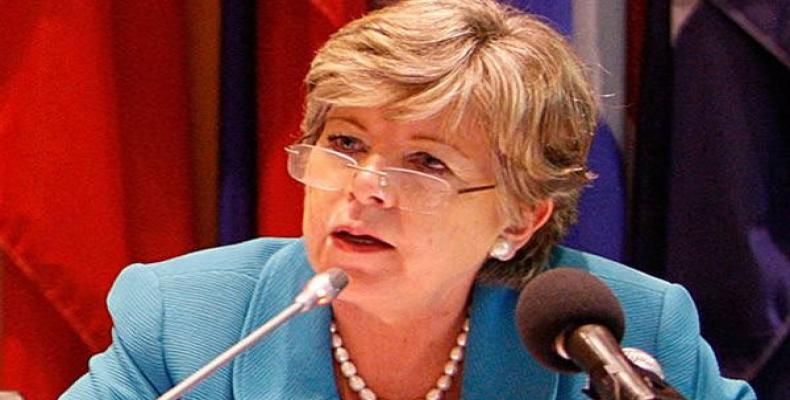 The case of Cuba must be distinguished because it opens to foreign investment but selects important items for the country and protects national jobs, highlighted in Havana Alicia Barcena, executive secretary of the Economic Commission for Latin America and the Caribbean (ECLAC).

The health of the economy in the Caribbean and Central America is something that the country should take into account, because in that area competitors in terms of attracting foreign capital are located, she told Cuban ACN news agency, when attended the 1st International Seminar on Opportunities and Challenges for the development of Latin America and Cuba, that took place at the Melia Cohiba Hotel in the Cuban capital.

Although for 2015 Latin America's Gross Domestic Product as a whole should not increase by more than 1%, in the Caribbean area, it could grow to 1.9%, she announced.
That situation should be used so that, rather than opponents, these nations become allies, she clarified, because simultaneous investment may occur, where every economy contributes its best, especially in nautical tourism and maritime transport, which are lines that are likely to be exploited given the natural conditions of the region.

I think that the Mariel Special Development Zone is an example of the use of competitive advantages in the process of foreign investment, because distance makes the export of Latin American products to other continents becomes more expensive, but the Cuban port could be used as stopover and platform for shipments, she predicted.

Parallel to the injection of foreign capital, I consider it to be an appropriate strategy to continue promoting the export of health services and cultural consultancy, the expert said.

Even in the future, when the country's infrastructure problems are resolved, Cuba could also export products related to Information Technology and Communications because it has the staff with the proper training and qualification to create them, stressed Mrs. Barcena.

Sun Beach, of Excellence Style Hotels, located at the Varadero beach resort, is the first one managed by that Colombian chain in Cuba.

The new hotel is directed by Omaira Garcia, who has 15 years of experience in the tourist sector, who said that since March 1st, the strategy of the hotel has been to maintain a policy that has clients as top priority, with quality studies to strengthen existing service values at the hotel --owned by the Cuban company Gran Caribe S.A--, and favor a warm stay.

The hotel's performance is currently under study to improve it, and in terms of entertainment also the day dedicated to Cuba, while another one dedicated to Colombia will be created as we are Latin Americans with many characteristics in common, Mrs. Garcia told local ACN news agency.

With 100 workers, the hotel, located on 17th Street between 1st and 3rd avenues in the tourist resort of Varadero, which is now represented at the International Tourism Fair underway in the northern keys of Ciego de Avila.

The all-inclusive, 3-star hotel has 272 rooms located some 80 meters away from the beach. Opinions in Trip Advisor, the largest travel Web site in the world, highlight the good relationship existing between the price and quality of services.

The signing of accords calculated at some 400 million dollars was a major result of a Cuba-UK business forum recently held in Havana in an effort to identify areas of mutual commercial interest.

The announcement was made by Lord John Hutton, co-president of the Cuba Initiative, a British-Cuban project promoting bilateral exchange.

Hutton said that the accords signed included the construction of a new gulf court, investment in agriculture and other projects in the area of energy.

The British official described the forum as successful and that they are satisfied, though there is still much to be done. The large number of business persons with the British mission in Havana confirms their interest in coming to Cuba.

With nearly 3 decades of experience in hotel business, Gaviota Tourism Group will open 4 new facilities this year to expand its presence in major tourist poles of Cuba.

Three of the new hotels will be located at Cayo Santa Maria, north of the province of Villa Clara, a center operated almost entirely today by the group; the other chosen destination is Varadero, Cuba's main resort, announced Frank Oltuski, marketing vice-president of Gaviota.

Quoted by Host News, Tourism Business Digital Paper, the executive explained that 3 of the new facilities will be managed by the branch Ocean, belonging to the H10 Spanish firm.

In the current International Tourism Fair, FitCuba 2015, Oltuski will provide these and other details about the group, now focused on diversifying its tourism product beyond hotel offer, with new projects to also expand its capabilities to marinas and nautical activities in the island.

Gaviota thus reaffirms itself as the greatest hotel group of the Caribbean country, with nearly 60 resorts and about 24,000 rooms, while maintaining an annual growth of 12%, says the publication.

Prestigious foreign chains like Melia, Iberostar, Blau, Blue Diamond, and others to be added, manage more than 85% of Gaviota's hotel capacity, associations that have allowed it to grow and gain experience with modern management methods.

To ensure all its services, this Cuban entity also has the travel agency Gaviota Tours, the Gaviotas marinas company, which will build new enclaves in Cayo Coco from 2017; and Transgaviota, for buses and car rentals.

Roberto Morales, member of the Central Committee of the Cuban Communist Party and Minister of Public Health (MINSAP) recently signed in this capital cooperation agreements with 3 African countries.

The signings with his counterparts from the Congo, Eritrea and Cape Verde took place at Havana's Convention Center, where the Cuba Health International Health Convention, attended by close to 2,000 delegates from all parts of the world was also held.

Maria Cristina Fontes, Health Minister of Cape Verde, pointed out that the agreement reaffirmed the willingness of the two peoples to continue cooperation, and expand it in the area of tourism and the sending of medical equipment.
She also emphasized the gratitude of her people towards the Cuban voluntary workers who offered their services for over 40 years and contributed to achieve in her country favorable health results, as compared to previous decades.

Also, François Ibovi, Minister of Health and Population of the Republic of Congo, expressed his satisfaction for signing the agreement with Cuba. Likewise, Anima Nurhussein, Minster of Health of the State of Eritrea, stressed the importance of these agreements, and expressed her appreciation for the invitation to participate in the International Convention and in the Health for All Scientific-Trade Fair.