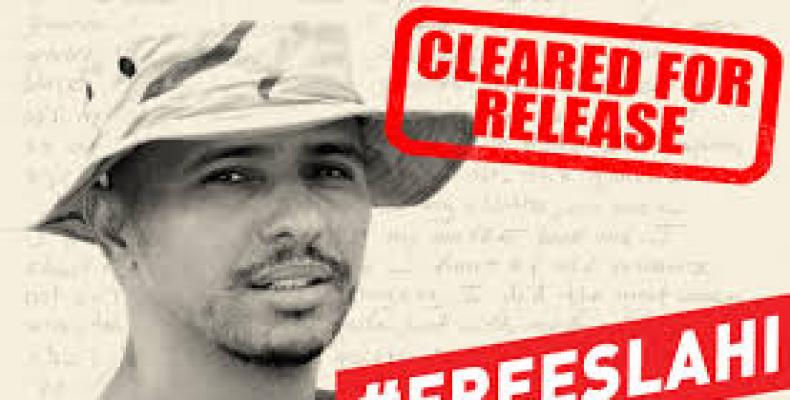 A parole-style review opened the way for Mohamedou Ould Slahi, author of “Guantanamo Diary,” to be moved out of the detention center at the U.S. naval base in Cuba.  But he cannot leave until U.S. authorities arrange for him to be repatriated to his West African homeland or another country.

Slahi, who is 45 years old, who arrived in Guantanamo in August 2002 and has been held without charge or trial, appeared before a Periodic Review Board -- a multi-agency government panel -- in early June.

His release takes place as U.S. President Barack Obama has been talking about closing the military-run Guantanamo Bay detention camp -- located on illegally-occupied Cuban territory -- since running for president in 2008, but despite years of promises, he says now that he won't use his power as commander-in-chief to unilaterally shutter the detention center.

Slahi became one of Guantanamo's most prominent inmates with the 2015 publication of his prison memoir in which he described his years of detention and interrogation, including being subjected to harsh techniques widely considered torture.  U.S. censors heavily redacted the 466-page manuscript he gave to his lawyers.

Slahi was first detained by authorities in Mauritania and was then sent to Jordan and Afghanistan and finally to the Guantanamo prison, which was opened under President George W. Bush to hold terrorism suspects rounded up overseas following the September 11, 2001 attacks. The facility became a symbol of the excesses of Bush’s “war on terror.”

The review board determined that Slahi "poses no significant threat to the United States," the American Civil Liberties Union said.  A U.S. official, speaking on condition of anonymity, confirmed Slahi was cleared for release and the ruling would soon be officially released.

The timing of Slahi’s departure could depend on whether he can return to Mauritania.  Many cleared prisoners have been held for years while the U.S. government seeks a country to accept them.