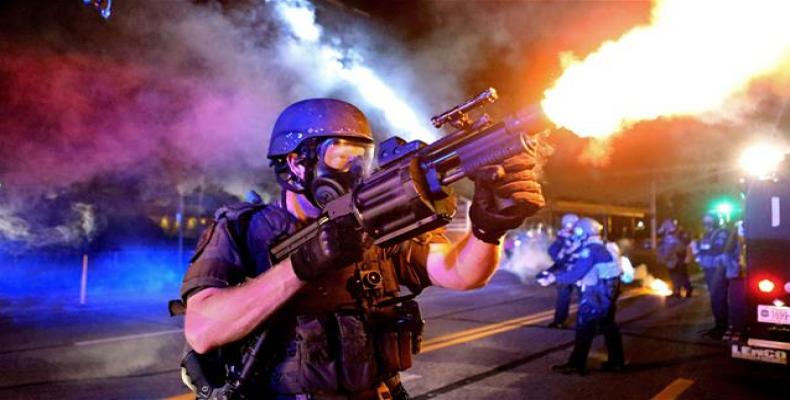 Washington, July 23 (RHC)-- The demilitarization of police, which often act like an occupying force in communities, is a key demand of Black Lives Matter activists.  But the White House is set to authorize police agencies to once again acquire military equipment, a move that is sure to be met with heavy criticism from activists seeking greater accountability from police in light of regular police killings of Black men.

Reuters reported that the U.S. government will revisit a 2015 ban on police forces getting riot gear, armored vehicles and other military-grade equipment from the U.S. armed forces.

The use of military gear by police agencies was criticized by supporters of the Black Lives Matter movement and other critics of police impunity and brutality as being part of a broader militarization of police, which was seen as a factor in the mistreatment of demonstrators and U.S. residents.

In response to the public outcry, the White House issued a ban in May 2015 on the transfer of some equipment from the military to police.  However, in light of recent killings of police, President Barack Obama agreed to review each banned item.

At that meeting, law enforcement leaders urged Obama to reinstate military equipment such as helmets, grenade launchers and tracked armored vehicles.  However, one of the demands of Black Lives Matter activists is for the demilitarization of police.

Despite months of peaceful protest, there has been very little progress on the issue of police brutality and the frequent shootings of Black people by police.  The decision to allow for even greater militarization of police is sure to provoke the ire of many activists, who have been forced to see political leaders not only ignore their demands but, rather, take regressive decisions.

Military-grade riot gear and armored vehicles continue to be a regular sight during protests against police brutality, and have become a staple in SWAT teams across the country.  Police claim they need the military-grade equipment to enhance officers' safety and their ability to respond to violent riots and dangerous hostage situations.

A White House official said the administration regularly reviews what military equipment can be transferred to police and that current rules ensure police get “the tools that they need to protect themselves and their communities while at the same time providing the level of accountability that should go along with the provision of federal equipment.”